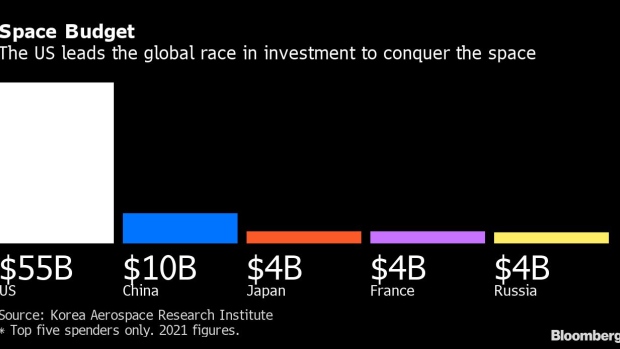 (Bloomberg) -- Space development can reshape the world economic order, a South Korean official said, as Seoul works to expand its prowess among a small group of countries capable of developing and launching their own space vehicles.

Titanium, platinum and rare-earth materials are among commodities South Korea should be able to independently excavate in space missions given their importance for future economic growth, Kwon Hyunjoon, director-general of the Science Ministry’s space and nuclear bureau, said in a briefing Tuesday.

South Korea is trying to play catchup in the global space race after launching its home-grown, three-stage Nuri rocket about a year ago. President Yoon Suk Yeol said last month his country plans to land a spacecraft on the moon in 2032 as it searches for minerals on the lunar surface. After that, South Korea will aim to touch down on Mars by 2045.

The country’s space program has been hit by a series of delays and troubles over the years and still has a while to go before it can reach the more advanced levels of neighbors China and Japan. On top of that, it remains to be seen if there is a cost-efficient way to extract resources on the moon, which would likely require a source for hydrogen and oxygen that could be used to power rockets, a research paper on lunar propellant production said.

Kwon compared the space race to the “Age of Discovery,” which he said “made a massive difference between countries able to transport men and materials across the seas and those that couldn’t.” The U.S. would be a key partner in space development rather than China, he added.

South Korea plans to spend more than 2 trillion won ($1.5 billion) to build a rocket to reach the moon and about 680 billion won on a landing craft, Kwon said.

The government will take the lead in jump-starting demand for spacecraft given the small domestic industry, he said. South Korea will initially focus on the market for satellites in low earth orbit, which would form a bigger share of the entire space industry Kwon estimated to be about 1,100 trillion won by 2040.