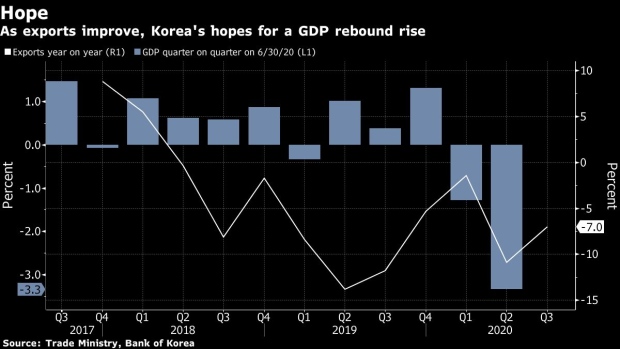 (Bloomberg) -- South Korea’s economy is poised to return to growth this quarter, led by consumption and investment, according to the country’s finance minister, who also said the government doesn’t plan another extra budget.

South Korea’s economy contracted 3.3% in the second quarter from the previous three months. It has since seen its exports fall at a smaller pace while consumption has continued to gain momentum.

The ministry is maintaining its 0.1% growth forecast for this year and sees a potential spike in coronavirus cases at home and abroad as the main risk, Hong said.

“The global pandemic has got to calm,” he said. “Averting negative growth would be considered a good defense.”

South Korea has so far managed to keep its domestic outbreak under control, but officials are on alert after cases almost doubled to more than 100 on Friday.

The government isn’t considering a fourth extra budget this year, Hong said, despite calls from some lawmakers. Damage from recent rainfall that has pounded some of the country’s provincial areas can be addressed by the current budget, he said.

South Korea has allocated more than 270 trillion won ($228 billion) in support for its economy and is pushing what it calls a “New Deal” initiative to boost the job market around technology and renewable energy.

Hong said he’d like to see South Korea and China extend a currency swap set to expire in October at a time when the pandemic is hurting both economies.

He also said South Korea will probably see tangible progress in its own vaccine development by the end of this year and approve its first product as soon as the first half of 2021.