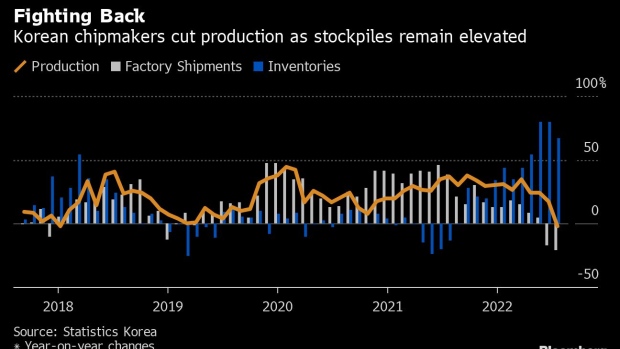 (Bloomberg) -- South Korea’s semiconductor output fell for the first time in more than four years in a sign chipmakers are bracing for a slowdown in global demand.

Semiconductor production slid 1.7% in August from a year earlier, a sharp reversal from the 17.3% gain reported in July, Statistics Korea data showed Friday.

The trio of indicators offers the latest evidence that the global economy is headed toward a downturn, led by cooling electronics demand that has been a major source of economic growth.

In the US, Micron Technology Inc. delivered a weak forecast for the current quarter, saying it’s acting swiftly to cope with the weakening demand, including slowing production.

Earlier this month, Korea’s Samsung Electronics Co. also warned of a gloomy outlook for the second half of the year. The market for dynamic random access memory, Samsung’s key cash driver, is tumbling so fast that it halved in size between May and July, according to IC Insights.

Chipmakers are the biggest industrial sector in South Korea’s trade-reliant economy, which is battling high energy prices and a currency that has depreciated the most in Asia this year outside the yen.