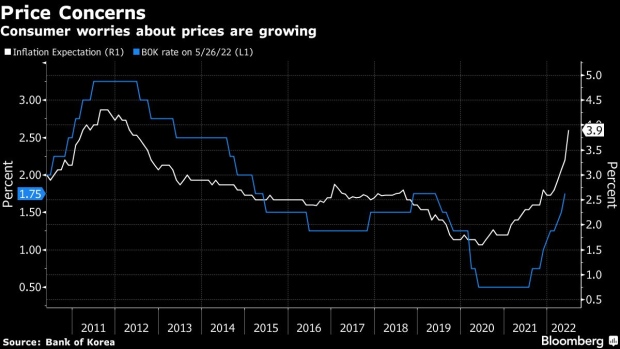 (Bloomberg) -- South Korea’s finance minister and central bank governor met Monday and agreed to ramp up their cooperation to deal with rising risks to the economy.

The meeting between Bank of Korea Governor Rhee Chang-yong and Finance Minister Choo Kyung-ho came a day before Korea releases its latest report on inflation, which economists surveyed by Bloomberg predict will have accelerated to 5.9%. Traders see the BOK raising its key interest rate by 50 basis points next week to cool down inflationary pressure.

Rhee and Choo agreed to “preemptively” act to prevent macroeconomic risks with rates rising both at home and abroad, according to a statement from the Finance Ministry. They also expected a “complex economic crisis situation” to last for a considerable period, it said.

Choo has warned inflation could surpass 6% this summer. Higher-than-expected gains in consumer prices have prompted the finance ministry and the BOK to revise their earlier growth forecasts to below 3% this year.

Initially triggered by pandemic-era stimulus and resurgent demand, inflation has emerged as a major threat to global economic growth, worsened by Russia’s war on Ukraine and global supply chain snarls. The Federal Reserve last month raised its rate by 75 basis points in a bid to cool US inflation.