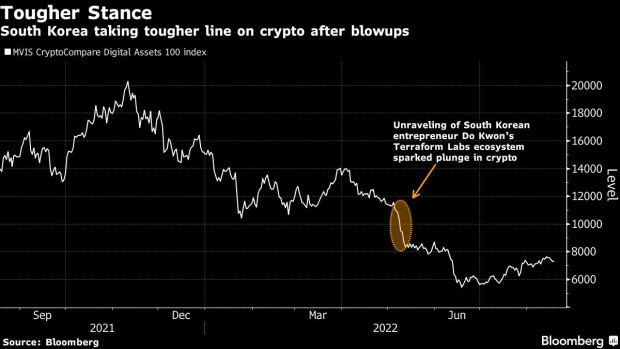 An employee walks past a monitor displaying the Bitcoin price chart at the Bithumb exchange office in Seoul, South Korea, on Friday, Feb. 4, 2022. During the brutal cryptocurrency selloff last month, volumes also tumbled -- a development that doesn’t bode well for exchanges that trade the digital tokens. Photographer: SeongJoon Cho/Bloomberg , Bloomberg

(Bloomberg) -- South Korea plans to block domestic access to foreign cryptocurrency exchanges that lack the proper registration to operate in the country and could launch a probe into the companies.

An intelligence unit of the Financial Services Commission has reported 16 foreign crypto businesses to the nation’s investigative body and asked other agencies to block access to the firms’ local websites, according to a statement on Thursday.

Officials intend to report violations to the countries where the companies originate from and will seek to isolate them from the rest of the local cryptocurrency sector if they fail to get the requisite permits.

People operating unregistered, illegal businesses face prison terms of as much as five years or fines of up to 50 million won ($37,900), according to the statement. They can also be banned from registering a company for a certain length of time.

Since then, more than half of the nation’s crypto exchanges ended operations. Currently, 35 virtual-asset service providers are registered as legal platforms in the country, according to the government. The latter include Upbit, Bithumb, Coinone, Korbit and Gopax, five exchanges that account for more than 99% of domestic market share.

Officials around the world are tightening up scrutiny of the crypto sector after a rout in prices this year caused a number of blowups. That included the $40 billion wipe-out in South Korean entrepreneur Do Kwon’s Terraform Labs ecosystem, which saw the TerraUSD stablecoin unravel.

(Updates with more context on local exchanges in the seventh paragraph.)