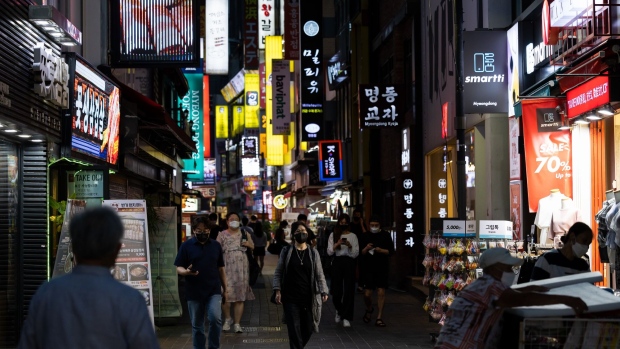 Pedestrians wearing protective masks walk through the Myeongdong shopping district of Seoul at night, South Korea, on Friday, Aug. 20, 2021. Focus is growing on whether the Bank of Korea can take the country's worst-ever virus wave in stride and tighten monetary policy on Aug. 26. , Bloomberg

(Bloomberg) -- South Korea is rushing to find ways to reduce expensive energy imports after surging fuel costs and a weakening won pushed the country’s trade deficit to a record.

The government is considering raising power bills to drive down energy consumption, according to the energy ministry. That will reverse its previous policy of limiting increases to protect consumers. Reducing imports is one way to help sustain a stable current account balance, Finance Minister Choo Kyung-ho said in a meeting earlier this week.

South Korea posted its worst-ever trade deficit in August after energy prices surged, and the currency weakened to levels last seen during the financial crisis over a decade ago. The global power and fuel crunch, exacerbated by Russia’s invasion of Ukraine, has sent natural gas and coal prices soaring to records this year.

It won’t be easy for Korea to cut energy imports. The nation is rushing to refill gas inventories before winter, and any slowdown in deliveries puts it at risk of fuel shortages when temperatures drop.

The cost to import crude, liquefied natural gas and coal surged 89% to $125 billion for the first eight months of this year from the same period in 2021, according to Korea Customs Service data. To maintain a reliable supply of electricity, the government will find ways to energy efficiency and reduce demand, the energy ministry said in a statement Friday.

Korea Electric Power Corp. has kept power prices unchanged to shield the public from inflation. The state-owned utility is now grappling with record losses, and asked the government to hike electricity rates by 50 won ($0.04) per kilowatt-hour in the fourth quarter, compared with increases of just 5 won in previous quarters, according to a company official who asked not to be identified because the information is private.

South Korea’s electricity consumption from all sectors increased in the first half of this year, since demand wasn’t affected by the rally in global prices, according to the energy ministry. “Normalizing” power prices is under consideration in order to give the right signals to the local market, it said.

“We need support from both the public and private sectors, as well as the citizens, to overcome the current crisis,” Vice Minister Park Il-jun said in a statement from the energy ministry. The government will “weigh various measures to minimize a hike in electricity bills,” he said.