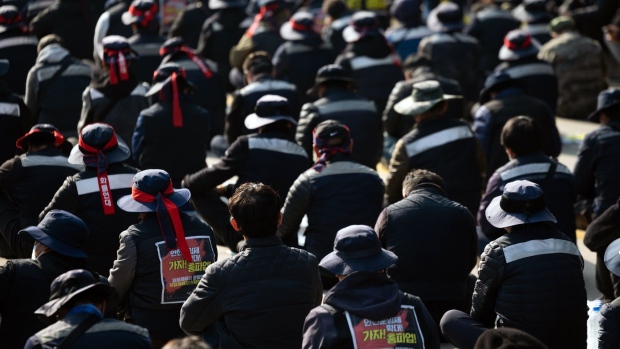 Truck drivers and members of the Korean Confederation of Trade Unions shout slogans during a protest at the Uiwang Inland Container Depot in Uiwang, South Korea, on Thursday, Nov. 24, 2022. Truck drivers are on strike in South Korea for the second time in less than a year, targeting major ports in a bid to disrupt key exports from autos to petrochemicals. , Bloomberg

(Bloomberg) -- South Korean President Yoon Suk Yeol asked his cabinet to be ready to issue an “imminent” return-to-work order on striking truck drivers in the oil and steel industries amid growing disruptions in the transporting of key materials in the global supply chain.

The government should seek “every measure” to minimize inconveniences on companies and the public, Yoon said during his cabinet meeting on Sunday.

“Oil, steel and other sectors that are expected to see additional damages should be ready to issue an imminent return-to-work order,” the president said in a statement issued by his office. The economy is being taken hostage by the striking truckers, Yoon said.

Such an order would be the second by the South Korean government since the truckers went on strike on Nov. 24.

On Tuesday, Yoon ordered striking cement truck drivers back to work, a move criticized by the union of truckers as “martial law.” It was the first time such a decree has been put in place on drivers since it was enacted in 2004.

Damage in other industries has been increasing, however, with 3 trillion won ($2.3 billion) worth of products in oil, steel, petrochemicals and other sectors unable to be transported as of Saturday, it said. Some construction processes were suspended at about 60% of almost 1,300 construction areas nationwide, while the number of gas stations suffering from fuel shortages is growing.