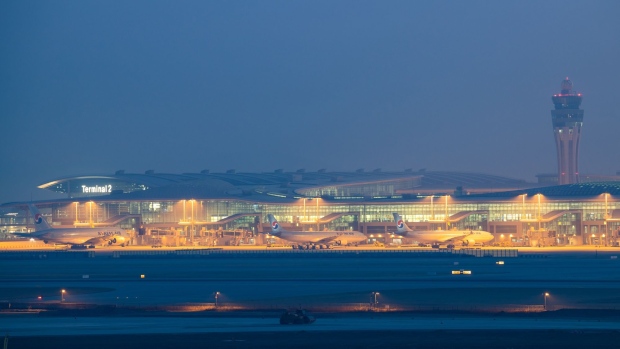 Korean Air Lines Co. aircraft sit on the tarmac at Incheon International Airport at dawn in Incheon, South Korea, on Monday, March 9, 2020. The coronavirus outbreak in South Korea is showing signs of slowing as the rate of new daily infections falls and health authorities almost finished testing members of a religious sect at the center of the epidemic, the country's health minister said. Photographer: SeongJoon Cho/Bloomberg , Bloomberg

(Bloomberg) -- South Korea’s financial authorities will provide one trillion won ($828 million) in liquidity to Korean Air Lines Co. by issuing government-guaranteed bonds as early as the end of this month, Yonhap News reported.

The cash-strapped flag carrier needs the funds to stay afloat as the aftermath of the Covid-19 outbreak is likely to continue to hinder its operations into the second half of 2020, according to the report, which cited an unidentified government official.

Earlier this year, the airliner received 1.2 trillion won of aid from the state-run Korea Development Bank and the Export-Import Bank of Korea for its financial needs in the first half, Yonhap said.

Korean Air has 3.3 trillion won in debt coming due this year alone, and the amount could swell to 4 trillion won if investors of its hybrid bonds exercise their rights for early redemption, it said.

Announcing the creation of a 40 trillion won fund to help seven key industries including airlines and shipbuilders weather the aftermath of the coronavirus outbreak, the financial regulator said the fund will be raised by issuing bonds guaranteed by the government, a decision subject to parliament’s approval.

The move to aid Korean Air follows the government’s recent meeting on how to run the five-year fund and issue bonds, Yonhap said.