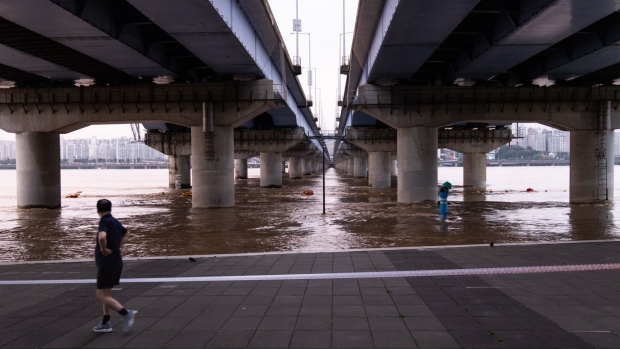 The Han River under the bridges after the heavy rain in Seoul, South Korea, Wednesday, Aug. 10, 2022. The torrential rains that started on Monday and continued into Tuesday caused flooding in parts of the city center. Photographer: SeongJoon Cho/Bloomberg , Bloomberg

(Bloomberg) -- South Korea will cut its national budget for the first time in 13 years in 2023, as the Asian nation seeks to tighten spending amid rising interest rates globally.

The government will “significantly trim” national spending for 2023 from this year’s 679 trillion won ($521 billion), Finance Minister Choo Kyung-Ho said Saturday. South Korea has increased government spending every year since 2010, especially under the administration of former president Moon Jae-in who took office during the pandemic, Choo said.

“We are tightening our belt,” he said. “The former administration had a lot of debts, and we can’t do that.”

South Korea President Yoon Suk Yeol has sought to cut spending and increase tax revenue since taking office in May, while the Bank of Korea has increased key policy rates four times this year to 2.25%. The nation’s inflation accelerated in July and the central bank governor indicated earlier this month that there would be a possible 25 basis point rate hike.

Choo warned of “a record drop” in public expenditure and said total government bond issuance will be down too, without providing a figure. Ministers and vice-ministers will have to return 10% of their salaries to the government as part of the efforts, he said.

Korea’s inflation seems to be nearing a peak, which Choo said he believes is around 6%. “Some people say inflation may reach 7%, but I don’t think that will happen unless a tremendous disaster occurs.”