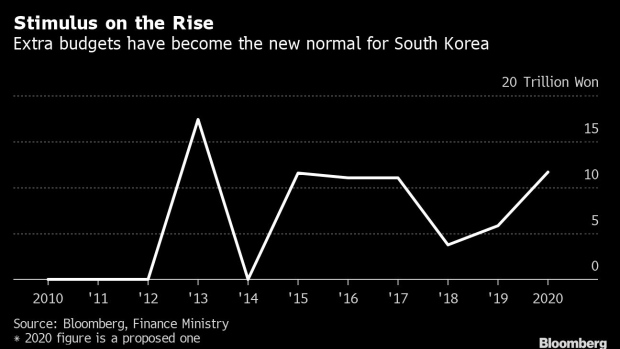 SEOUL, SOUTH KOREA - MARCH 03: South Korean soldiers wearing protective gear, spray antiseptic solution against the coronavirus (COVID-19) in Guryong slum on March 03, 2020 in Seoul, South Korea. The South Korean government has raised the coronavirus alert to the "highest level" as confirmed case numbers continue to rise across the country. According to the Korea Centers for Disease Control and Prevention, 600 new cases were reported on Monday, with the death toll rising to 28. The total number of infections in the nation is currently 4,812, the highest outside of China. (Photo by Chung Sung-Jun/Getty Images) , Photographer: Chung Sung-Jun/Getty Images AsiaPac

The plan was unveiled just hours after the U.S. Federal Reserve slashed interest rates by half a percentage point in the first such emergency move since the 2008 financial crisis. Group of Seven finance chiefs also issued a statement saying they’re ready to act to shield their economies from the spreading virus.

The Bank of Korea called an emergency meeting for early Wednesday, but no outcome has been announced yet.

The latest data from South Korea show the epidemic is depressing domestic demand and hitting supply chains, with factories at home and in China operating far below capacity. President Moon Jae-in earlier called for “extraordinary” steps to protect the economy.

The plan adds 8.5 trillion won in new spending to an annual budget that was already the biggest on record. Another 3.2 trillion won is earmarked to address a tax-revenue shortfall.

While multiple Asian central banks have lowered interest rates in response to the virus, the Bank of Korea took a more targeted approach, saying that channeling cheaper loans to businesses is a more effective way to handle the crisis for now.

South Korea’s government will submit the extra budget for parliamentary approval on Thursday. Some 10.3 trillion won worth of government bonds would be issued to fund the plan, raising the ratio of debt-to-gross-domestic-product to 41.2% from 39.8%.

The new budget allocates 2.3 trillion won to medical support, providing money for clinic construction and patient stipends, the finance ministry said. Another 2.4 trillion won would be used to provide loans and subsidies for businesses, while 3 trillion won would go to support low-income families and jobs, it said.

Before the virus hit, South Korea’s economy was showing some signs of a recovery, which the epidemic now seems to have derailed or delayed. The Bank of Korea last month cut its growth forecasts for this year to 2.1% from 2.3%.

The government last week announced a separate raft of measures, including rent subsidies for small businesses and temporary tax breaks on car purchases. In 2015, when the Middle East Respiratory Syndrome swept the nation, the parliament approved a 11.6 trillion won supplementary budget.

--With assistance from Michelle Seoh.

To contact the editors responsible for this story: Paul Jackson at pjackson53@bloomberg.net, Jason Clenfield, Jiyeun Lee