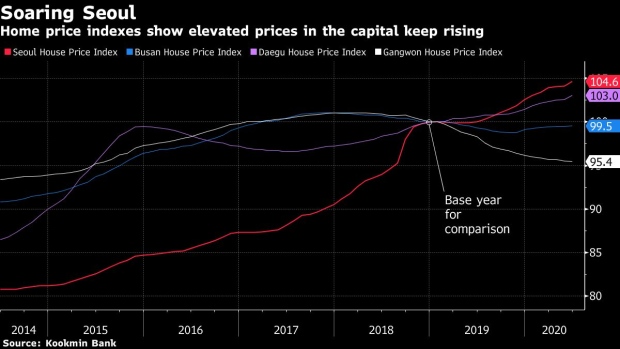 People look out at the city skyline from Mount Namsan in Seoul, South Korea, on Friday, Aug. 11, 2017. South Korea's stocks and currency fell after President Donald Trump warned North Korea that if it "does anything" to the U.S. or its allies "things will happen to them like they never thought possible." Photographer: SeongJoon Cho/Bloomberg , Bloomberg

Prime Minister Chung Sye-kyun, a Moon appointee, urged high-level officials Wednesday to sell such properties as soon as possible. The demand comes after rising discontent over prices prompted fresh scrutiny of the property holdings of senior Moon administration officials, including his chief of staff.

“If high officials own multiple properties, it is difficult for us to earn trust from our people,” Chung told a meeting of top government officials. “High-level officials must set an example. To be honest, we should have done this a lot earlier.”

Home prices have continued to surge in some parts of the country, despite a series of property-related measures launched by Moon since he took office in May 2017. Moon pledged an “endless” stream of steps in January, after earlier moves -- including higher property taxes, tighter lending rules and limits on using mortgages to buy apartments -- failed to stop the rise.

Complicating the government’s task is the divergence in market trends among cities. While apartment prices in Seoul soared more than 50% since May 2017 to average 925 million won ($774,000) last month, those in the southern port of Busan rose just 2% during the same period to 295 million won.

Anger over home prices has helped pull Moon’s popularity back down after his success against the coronavirus earlier propelled his Democratic Party of Korea to a landslide win in April parliamentary elections. Moon’s approval rating fell 3.5 percentage points to 49.8%, according to a Realmeter survey released Monday, slipping below 50% for the first time in almost four months.

The housing controversy has brought fresh attention to the second homes owned by top government officials, since some blame the proliferation of non-owner-occupied homes for driving up prices. While such officials have pledged to sell in the past, they haven’t always followed through.

Moon’s chief of staff, Noh Young-min, backtracked on plans to sell a house in Seoul’s affluent Gangnam area, instead moving to unload another property in Chungju, outside Seoul. On Wednesday, Noh said that he would sell his Gangnam property after all.

Moon’s office, known as the Blue House, referred questions about the controversy to a briefing last week by the president’s spokesman, Kang Min-seok. In that briefing, Kang said that Noh had “strongly urged” high-level officials to sell any second homes, without elaborating.

The Seoul government last month announced plans to expand regulated zones that face stricter mortgage and tax rules and raise corporate property taxes to prevent speculative investment. The latest measures come after the government pledged more than 270 trillion won to support an economy battered by the pandemic and the Bank of Korea slashed its benchmark rate to a record low of 0.5%.

The rise in home prices have drawn unflattering comparisons to Moon’s conservative predecessors, who have been traditionally seen as more supportive of policies favorable to property owners. The 52% increase in apartment prices under Moon exceeds the 29% rise under former President Park Geun-hye, who was impeached and removed from office three years ago, according to a survey released June 23 by the Citizens’ Coalition for Economic Justice.

“It’s revolting to see those officials in the Blue House and the ruling party announcing their plans to sell houses, only after the public outcry soars,” Hong said in a Facebook post Wednesday.