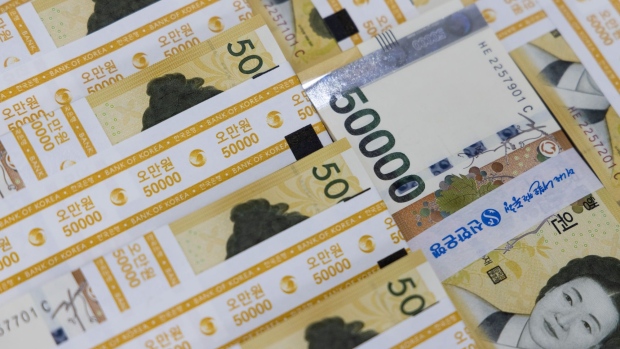 Bundles of 50,000 won banknotes in this arranged photograph at the Shinhan Bank headquarters, a unit of Shinhan Financial Group Co., in Seoul, South Korea, Sept. 14, 2022. Policy makers in Asia pushed back against a surging dollar, seeking to stem losses as their currencies teetered on the brink of key levels that may trigger more selling. Photographer: SeongJoon Cho/Bloomberg , Bloomberg

(Bloomberg) -- The surging dollar is showing there’s only one macro asset worth buying when the Federal Reserve tightens above its long-term neutral rate.

Traders offloaded stocks, bonds and major currencies for a second day after the US central bank raised rates for a fifth time this year. The yen, the biggest Group-of-10 loser, briefly slid past 145 per dollar, prompting Japan’s top currency official Masato Kanda to warn the government may step in.

The relentless rise in the dollar is heaping pressure on authorities to defend their currencies, although a depleting stock of reserves leaves them with less firepower as capital outflows intensify. Even China’s central bank -- which has more than $3 trillion of reserves -- has seen its currency drop to levels last seen during the 2020 pandemic -- which is also when the dollar was the haven of choice.

“Even the PBOC can’t fight dollar strength -- not when the Fed is hiking aggressively and the PBOC has been easing policy recently,” said Khoon Goh, head of Asia research at Australia & New Zealand Banking Group Ltd. “Dollar strength looks set to continue as the Fed has signaled clearly their intent to take rates well into restrictive territory.”

The yen fell as much as 0.9% to head toward the 146.78 level where the authorities last intervened to prop it up in 1998. Officials have stepped up verbal warnings in recent weeks and the BOJ was said to have conducted a so-called rate-check on Sept. 14, a move that’s seen as a precursor to intervention.

The onshore yuan was set for a fourth day of declines in the longest losing streak since June. The People’s Bank of China has sought to support the currency by setting its fixing at stronger-than-expected levels in every single session for nearly a month.

“There are still ammunition that the PBOC can tap on to slow the yuan depreciation,” said Fiona Lim, senior foreign-exchange strategist at Malayan Banking Bhd. “But the central bank is clearly trying to pace this out, especially when external forces of global growth fears and policy tightening are dominant.”

The MSCI Emerging Markets Currency Index has fallen 7.5% so far this year to head for its steepest annual loss since 2008.

The Fed raised borrowing costs by 75 basis points on Wednesday for the third time in a row and forecast a further 1.25 percentage points of tightening before year end. Its neutral rate stands at 2.5%.

The surging dollar also pummeled other asset classes. Two-year Treasury yields surged past 4%, a level not seen since 2007. S&P 500 futures dropped as much as 1% while the MSCI Asia Pacific Index headed for a sixth straight weekly decline.

Dollar Main Game in Town After Fed, With China Also a Preference

But the won’s declines may illustrate that policy makers are virtually powerless to fight against the surging dollar.

South Korea’s currency fell to 1,413.40 per dollar Thursday, the weakest since March 2009, even after officials directed banks to issue hourly foreign-exchange reports to stem the declines. Central bank chief Rhee Chang-yong has also raised the prospect of a jumbo rate hike following the latest Fed decision.

As an export-driven economy, “South Korea tends to be highly dependent on foreign drivers, which explains why the won is particularly weak,” said Moon Hongcheol, a fixed-income and currency strategist at DB Financial Investment Co. “The won could weaken further as the focus turns to the nation’s economic fundamentals should the BOK deliver more hikes,” and exports continue to slow, he added.