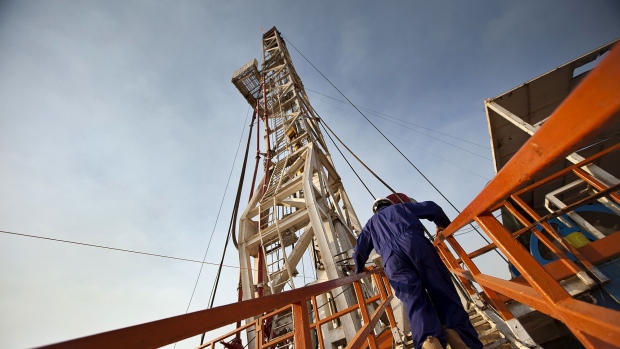 A worker for the Chinese company Zhongyuan Petroleum Exploration Bureau (ZPEB) climbs onto the drilling platform of an oilrig near Melut, in the Upper Nile, Sudan, on Monday, Nov. 29, 2010. , Photographer: Trevor Snapp/Bloomberg

(Bloomberg) -- South Sudan is investigating an increase in the number of infants born with deformities in crude-producing regions and whether the cases are linked to pollution, the Petroleum Ministry said.

The ministry referred one such child from Ruweng, a northern region that produces most of the nation’s oil, to neighboring Kenya for a medical examination to establish the cause, it said in a statement from the capital, Juba.

“The Ministry of Petroleum is currently working toward finding solutions to whether the deformation, stillbirths and miscarriages are due to the oil pollution,” according to the statement.

The world’s youngest country holds sub-Saharan Africa’s third-biggest crude reserves and has been battered by decades of conflict and a civil war that led to its secession from Sudan.

To contact the reporter on this story: Okech Francis in Juba at fokech@bloomberg.net

To contact the editors responsible for this story: David Malingha at dmalingha@bloomberg.net, Helen Nyambura, Hilton Shone