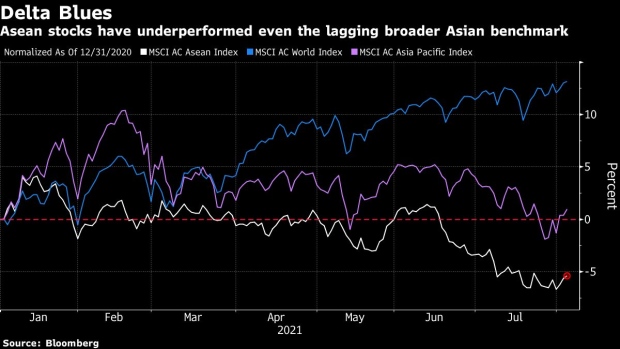 (Bloomberg) -- A combination of delta variant surge and low vaccination rates has made Southeast Asia the world’s worst virus hotspot and its financial markets are feeling the brunt.

Stocks have slumped as deaths in the region soar, with benchmarks in the Philippines and Vietnam leading global declines over the past month. Del Monte Philippines delayed its initial public offering this week citing market volatility from rising caseloads, and some analysts are predicting more losses for Southeast Asian currencies that have lagged the broader region this quarter, with the Thai baht at its weakest since 2018.

For investors the key sticking point before looking to bet on a recovery is low vaccinations, with many countries in the region yet to get out of single digits in terms of percentage of population fully inoculated. That’s leading to postponed reopenings and reinstated mobility restrictions -- a divergence from the rest of the world -- exemplified by Indonesia recently ditching a target of reaching herd immunity.

“Asean markets are failing because it hasn’t reached the 70% vaccination needed to slow Covid-19 infections,” said Alan Richardson, senior portfolio manager at Samsung Asset Management (HK) Ltd. “Mass vaccination is the only way to return to sustained re-opening because the virus is endemic.”

Here’s a cross-asset look at how the virus surge has impacted Southeast Asian markets:

Even in an Asian stock market that is lagging global peers, Asean shares stand out for their underperformance. The MSCI Asean Index has fallen more than 5% this year, compared to an about 1% rise in the regional benchmark MSCI Asia Pacific Index. The MSCI AC World Index is up 13%.

“We believe further negative GDP revisions are likely,” said Arun Sai, senior multi-asset strategist at Pictet Asset Management in London. “The momentum of our leading indicators puts Thailand, Philippines, Malaysia and Singapore in the bottom half among emerging markets.”

Underscoring the importance of vaccinations, Singapore’s globally-exposed benchmark is bucking the trend with year-to-date gains of 12%. The island nation has fully inoculated more than 60% of its population.

Sovereign bonds from Thailand, Philippines and Malaysia have all taken a hit, with local total return indexes down about 1% in dollar terms since the end of June. Investors fear governments will have to incur more debt to curb the latest outbreaks and provide relief to hard-hit businesses and individuals.

However, there are bright spots. Indonesia last month cut its net bond issuance target for the year, making its higher-yielding notes even more attractive at a time of slumping U.S. yields. The securities have handed investors a return of more than 3% since June 30.

Malaysia’s ringgit and the Philippine peso have slumped nearly 2% and 3% respectively against the greenback this quarter, while the Thai baht is among the worst-performing currencies in the world after weakening almost 4%.

Given the large output gaps that are expected to persist in Asean economies, “we now expect further depreciation for these currencies in the coming months,” HSBC Holdings Plc analysts including Paul Mackel wrote in a recent note.

For Alvin Tan, head of Asia currency strategy at RBC Capital Markets in Hong Kong, the strategy now is to set levels at where investors would buy the currencies on further weakness. He recommends selling the dollar against Indonesia’s rupiah at about 14,550 and against Malaysia’s ringgit near 4.30.

Still, not every asset class has come under pressure. Southeast Asia’s corporate debt has proved resilient against its regional equivalents due to a higher proportion of investment-grade notes and government-backed issuers. The extra yield on Asian corporate dollar bonds over Southeast Asian peers has jumped to the most in at least three years, reflecting a rout in Chinese debt.

“Given the tighter policy headwinds in China, exposure to Asean markets helps to provide some diversification for Asia fixed-income portfolios,” said Sheldon Chan, portfolio manager of T. Rowe Price’s Asia Credit Bond Strategy in Hong Kong. “Despite the threat of virus variants and a slower vaccine rollout on near-term growth prospects, we still remain comforted that the region as a whole remains reasonably well-buffered against external vulnerabilities.”