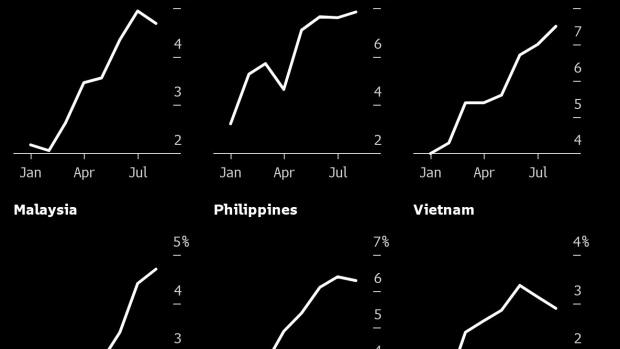 Customers rest at the food section of a Pilipinas Shell Petroleum Corp. gas station in Las Pinas, the Philippines, on Wednesday, Sept. 7, 2022. Pilipinas Shell plans to have retail shops and restaurants in a third of its gasoline refilling stations by 2025 as its seeks to boost revenues beyond fuel. , Bloomberg

(Bloomberg) -- In the worldwide quest to conquer the inflation peak, Southeast Asian central bankers appear to be better off than most, though still far from declaring victory.

Three of the region’s six-biggest economies have registered tentative deceleration in their latest consumer-price growth data. Singapore’s all-items CPI surged to 7.5% in August from a year earlier, the highest in more than 14 years, and Malaysia’s jumped by 4.7%, the fastest pace in more than five years, according to reports released Friday.

Indonesia and the Philippines are staring down a further bubbling in prices, taking little solace in the most recent data. Subsidies are being eased in Indonesia while the Philippines is facing persistent food shortages.

On Thursday, Bank Indonesia delivered a bigger-than-expected hike of 50 basis points. Central bankers in the Philippines also increased their benchmark rate by a half-point, matching the Bloomberg survey median. Both cited inflation that’s likely to stay above their 2%-4% target bands going into 2023.

Thailand is expected to announce its rate decision on Sept. 28.