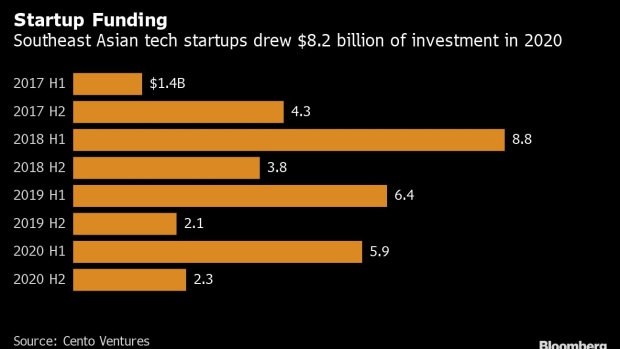 Vehicles sit in traffic on a highway in Jakarta, Indonesia, on Tuesday, March 16, 2021. Indonesia is pursuing another attempt at increasing government influence in the decision-making and operations of its central bank, as well as expanding its ability to fund public debt, according to a draft legislation to be discussed in parliament. , Photographer: Dimas Ardian/Bloomberg

(Bloomberg) -- Southeast Asian technology startups defied the pandemic and attracted a similar level of investments in 2020 as the year before, outperforming most other emerging markets.

The region’s tech upstarts raised $8.2 billion, down 3.5% from 2019, research from Cento Ventures showed. That compares with a 31% drop in India and 38% in Africa, according to the Singapore-based venture-capital firm.

The region of about 650 million people is moving online fast, with countries such as Indonesia, Thailand and Vietnam embracing e-commerce, fintech and transportation apps. Still, Southeast Asia trailed the U.S. and the European Union, whose tech startups drew record investments last year and grew 13% and 15%, respectively, Cento said. Startups in China attracted 6% more funding than the year before.

“2020 offered a harsh reason to reassess how technology can be harnessed to maintain vital function of the society,” said Dmitry Levit, a partner at Cento, an early-stage investor which has backed startups including 2C2P, iPrice Group and Pomelo. “Investments into digital transformation of retail, food, financial services and logistics surged accordingly, and we’ll see more industries react similarly in 2021 and 2022.”

Almost half of the funds raised went into unicorns including Grab Holdings Inc., Gojek, Bukalapak.com and Traveloka. Deals of more than $100 million accounted for 57% of the total investments, while those between $50 million and $100 million rose to a record $1.1 billion, up 26% from a year ago.

Indonesian startups clinched 70% of the capital invested in Southeast Asia, with Indonesian and Singaporean startups together accounting for 64% of the total number of deals, the report showed.