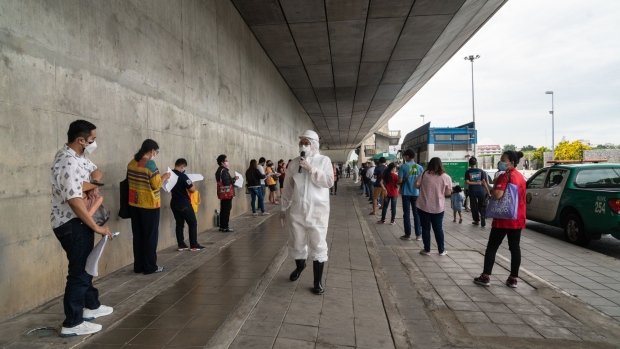 Joko Widodo, Indonesia's president, wears a protective face mask as he stands at Presidential Palace in Jakarta, Indonesia, on Wednesday, April 7, 2021. President Widodo is backing a push to expand Bank Indonesia’s mandate to include support for the economy, throwing his public support behind a legislative move that some analysts see as risking the central bank’s independence. , Bloomberg

Southeast Asia continues to reel from a new wave of infections that has made the region the new epicenter of the virus. Thailand reported a record 11,397 new cases, while Indonesian President Joko Widodo urged his ministers to adopt a “sense of crisis” as the country overtook Brazil in daily cases to become the worst in the world.

In the U.K., Health Secretary Sajid Javid tested positive, two days before England lifts almost all Covid-19 curbs, even as Britain registered more than 50,000 new cases. Thousands took to the streets in France to protest President Emmanuel Macron’s move to pressure people into getting Covid-19 vaccinations.

The Tokyo Olympics registered its first case at the athletes’ village, less than a week before the opening ceremony.

The U.K. government said every adult has been offered a first dose of a Covid-19 vaccine and two-thirds of the population have had two shots, as the delta variant rages across the country and Prime Minister Boris Johnson prepares to lift most curbs in England on Monday.

The eight-week gap between first and second inoculations in the U.K. means every adult will have the option of getting both doses by mid-September, the Department of Health and Social Care said. “Let’s finish the job. If you’re over 18, book your jabs today,” Johnson said in a statement.

The U.K. reported 54,674 new Covid cases on Saturday, the most since Jan. 15 as the spread of the delta variant pushes infection rates near records for the pandemic. Hospitalizations rose to 3,964, the most since late March. But the success of the vaccine drive has limited the death count in the latest wave, with 41 deaths reported Saturday, compared with more than 1,800 in a day at the peak in January.

This week, Los Angeles reimposed mask mandates indoors -- regardless of vaccination status -- and San Francisco and Las Vegas issued mask recommendations as cases driven by the delta variant continue to rise. The variant now represents 41% of samples tested in New York City, a jump from 26% for the previous week.

Earlier this week, Mayor Bill de Blasio said there were no plans to reimpose mask mandates in New York City.

At the state level, 1,156 new infections were reported on Saturday by Governor Andrew Cuomo after daily case counts briefly dipped below 300 in June. The positive test rate has also been rising, to a seven-day average of 1.19%. Hospitalizations remain low, at 354, as do deaths, at 4.

Thousands took to the streets across France on Saturday to protest President Emmanuel Macron’s move to pressure people into getting Covid-19 vaccinations -- even as large numbers of their fellow citizens are signing up. A vaccination center in the Isere department was vandalized last night, Le Figaro reported.

Earlier this week Macron made Covid-19 shots mandatory for health care workers and decided that so-called “health passes” -- which show proof of testing or immunization -- should be obligatory to access venues such as restaurants and cafes.

The “health pass” is backed by about 62% of citizens, the Le Parisien newspaper reported today, citing an Ipsos/Sopra Steria opinion poll.

“The delta variant is there, we can’t hide it,” Prime Minister Jean Castex said on Saturday. “The only solution is getting vaccinated.”

France is giving logistics support to Tunisia to fight against the Covid-19 pandemic, the French Ministry of Armed Forces said in a statement on Saturday.

The army was mobilized to transport liquid oxygen to Tunisia. Medical material will follow in coming days, President Emmanuel Macron said in a tweet.

British Health Secretary Sajid Javid said he tested positive for Covid-19, less than a month after returning to Prime Minister Boris Johnson’s cabinet to lead the government’s response to the pandemic.

Johnson may have to spend Monday, which he has dubbed “Freedom Day,” in self-isolation because he met Javid on Friday. The U.K. is due to remove virtually all coronavirus restrictions on Monday.

Senegal President Macky Sall renewed calls for people to avoid gatherings ahead of the West African nation’s most celebrated holiday due to a surge in coronavirus cases.

The appeal comes days before the Eid al-Kebir holiday, known as Tabaski in Senegal, a predominantly Muslim country.

Senegal, which has reported 49,008 coronavirus cases so far, has seen the number of infections rise 12% over the past two weeks.

France confirmed it’s toughening rules on travel and boosting border checks from Sunday in an effort to contain a spike in cases linked to the Covid-19 delta variant, and to avoid further lockdowns.

Travelers from the U.K. without proof of full vaccination must test negative for Covid-19 within 24 hours of travel, the prime minister’s office said in a statement. Late on Friday the U.K. said arrivals from France would need to quarantine for 10 days, beginning on Monday, regardless of vaccination status. Reeling from the delta variant, the U.K. is now looking to contain the beta variant.

Non-fully vaccinated travelers from Spain, Portugal, Cyprus, the Netherlands and Greece, EU countries where cases are rising sharply, will also need a negative test taken less than 24 hours before arrival in France.

Visitors vaccinated with a version of the AstraZeneca Plc vaccine made by India’s Serum Institute will now be allowed to enter France, the statement said.

Cases have fallen rapidly, and the Centers for Disease Control reported just eight new local infections Saturday, the first single-digit total since May 11.

Malaysia added 12,528 new coronavirus cases on Saturday, according to the health ministry, a day after the government decided not to extend tightened movement restrictions in Selangor.

The country’s most industrialized state accounted for the majority of cases, with 4,985 new infections, followed by capital city Kuala Lumpur at 1,740. Malaysia is struggling to curb new cases, which surpassed a record 13,000 for the first time on Thursday.

The country plans to ease restrictions for individuals who have been fully inoculated and may allow companies to be fully operational if their workers receive both doses of vaccine. Almost 13% of the population have been fully vaccinated, and the government aims to boost that to 60% by the end of September.

Two Los Angeles officials are pushing back on the county health department’s plans to impose the use of masks indoors regardless of vaccination status.

Sheriff Alex Villanueva said the order, set to take effect at 11:59 p.m. on Saturday, isn’t “backed by science” and contradicts Centers for Disease Control and Prevention guidelines. A county board supervisor said departing from California’s state policies creates confusion at the local level.

“I am concerned by rising cases, but I don’t believe the mask mandate will help efforts to stress vaccine efficacy and compel unvaccinated residents to get vaccinated,” said Kathryn Barger, one of the county’s supervisors.

Indonesia’s President Joko Widodo urged ministers to adopt a “sense of crisis” as the country overtook Brazil in daily coronavirus cases to become the worst in the world.

Jokowi, as the president is known, called off a paid vaccination plan and told state officials not to travel overseas after a wide public backlash, urging them to exercise “social sensitivity,” Cabinet Secretary Pramono Anung said.

Only the foreign minister and those given special permission by the president can travel abroad, he added. “The president has emphasized that in this period of emergency curbs, surely there must be a sense of crisis throughout all ministries, institutions and leaders,” Anung said.

The Southeast Asian nation reported 10,082 new infections on Saturday, exceeding 10,000 for the first time, despite the imposition of lockdown-like restrictions since Monday. There were 141 deaths, data from the Center for Covid-19 Situation Administration show.

The Tokyo Olympic Games registered its first coronavirus case at the athletes’ village, less than a week before the opening ceremony.

A foreign personnel member -- not an athlete -- tested positive and is in quarantine, a document from organizers showed on Saturday. So far there have been 45 positive cases tied to the Tokyo Games, but this is the first to come from within the Olympic Village. The infections underscore the challenge for organizers who’ve pledged to provide a safe Olympics.