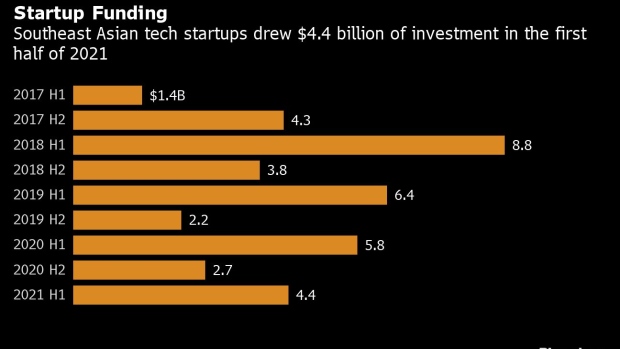 Pedestrians ride an escalator past an electronic screen and ticker board that indicates stock figures at the Singapore Exchange Ltd. (SGX) headquarters in Singapore, on Wednesday, Jan. 21, 2015. SGX posted its first quarterly profit growth in more than a year after a world-beating rally in Chinese stocks spurred demand for derivatives. Photographer: Bloomberg/Bloomberg , Photographer: Bloomberg/Bloomberg

(Bloomberg) -- Venture backers made a record number of investments in Southeast Asian startups in the first half of this year, though the value of those deals declined as investors focus on early stage deals in the region’s burgeoning internet scene.

There were 393 investments across the region in the first half, topping the previous record of 375 in the first half of 2019, research from Singapore’s Cento Ventures showed. Total capital raised was $4.4 billion, down from $5.8 billion a year earlier. The fall is mainly attributable to less outsized fundraising by unicorns such as Grab Holdings Inc. that dominated the region’s capital raising in the past as they are now seeking to go public.

The average deal size fell to $11.2 million from $17.7 million a year earlier as investors focused on early-stage investments. Less than 10% of the deals were series C rounds or later, while the vast majority were series B, series A or pre-series A.

In September, a handful of startups annouced sizable fundraising rounds. They include Ninja Van, which raised $578 million and Advance Intelligence Group, which received an investment of more than $400 million.

India remained the most-funded among emerging markets in the first half with startups there raising $10.8 billion during the period. Latin America followed suit, raising $6.2 billion, according to the latest biannual report by the venture capital firm.

Indonesia was the top destination for investment in Southeast Asia, accounting for half of all the capital raised in the first half, followed by Singapore, which attracted 32% of capital raised.