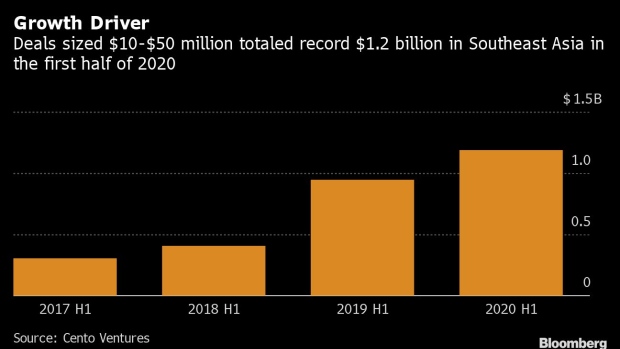 Buildings stand in Singapore on Monday, July 6, 2020. Prime Minister Lee Hsien Loong vowed to hand over Singapore “intact” and in “good working order” to the next generation of leaders, predicting the coronavirus crisis will “weigh heavily” on the nation’s economy for at least a year. Photographer: Wei Leng Tay/Bloomberg , Bloomberg

(Bloomberg) -- Southeast Asian technology startups raised less money this year as the coronavirus pandemic roiled markets, but the decline was less acute than some other parts of the world, according to a new report.

They raised $5.6 billion of investments in the first half of this year, down 13% from a year ago, research from Singapore-based venture capital firm Cento Ventures released on Friday showed. That compares with a 16% drop in India and 21% fall in the European Union. North America saw declines of 8% during the same period, according to the report, which covered almost 3,500 deals and is primarily based on public announcements and community disclosures from companies and investors.

“All things considered, Southeast Asia held up surprisingly well,” Dmitry Levit, a partner at Cento Ventures, said in an interview.

Covid-19 is chilling deal activity worldwide but investors continued to fund growth-stage startups in areas that benefit from a surge in online activity. In Southeast Asia, investments of between $10 million and $50 million, typically known as Series B and C financing, totaled a record $1.2 billion in the first half of this year, up about 25% from a year ago.

“Growth in $10-$50 million deals and the proliferation of $100 million companies seem to be really the two powerful developments in the region in recent years,” Levit said, whose firm has been publishing tech startup funding and exit data since 2017.

Southeast Asian ride-hailing giant Gojek raised $1.2 billion in March. And in May, Singapore’s Ninja Van raised $279 million from backers including France’s GeoPost SA, scoring one of Southeast Asia’s largest startup investments since the pandemic. Facebook co-founder Eduardo Saverin’s B Capital Group and Monk’s Hill Ventures were among those that took part in the parcel delivery firm’s Series D round.

Ninja Van joins a select club of firms that have raised significant money this year, including Indonesian online marketplace GudangAda with a $25.4 million deal.

Still, the outlook is uncertain amid the ongoing economic downturn. The various lockdown measures, travel bans and other constraints were at their peak during the second quarter, so the full effects will likely only show up in the investment numbers in the third and fourth quarter of this year, according to the report.