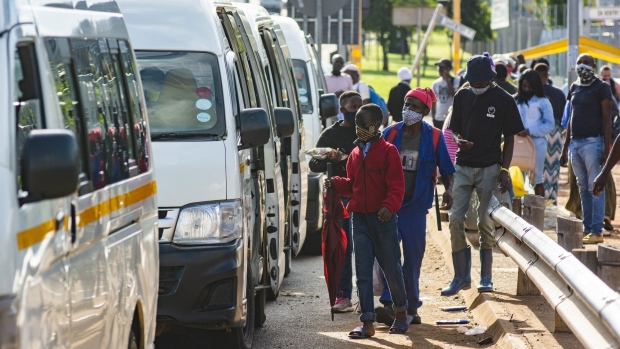 Commuters wear protective face masks as they queue for taxi vans in Pretoria, South Africa, on Monday, Feb. 8, 2021. South Africa will temporarily halt the rollout of AstraZeneca Plc’s vaccine and accelerate its supply of shots from Johnson & Johnson and Pfizer Inc. after a trial showed the shot had limited efficacy against a new variant of the virus first identified in the country late last year. Photographer: Waldo Swiegers/Bloomberg , Bloomberg

(Bloomberg) -- The number of coronavirus cases in southern Africa surged 32% in the week to May 8 as omicron variant sublineages discovered last month in South Africa spread.

The region recorded 46,271 cases in the week, driven by a quadrupling of cases in South Africa over the last three weeks, the World Health Organization said in a statement on Thursday. Deaths doubled in the country over that period to 376.

“The current surge is being driven by omicron subvariants and relaxed local restrictions,” said Abdou Salam Gueye, director of regional emergency preparedness and response for the WHO’s African office, said on a video conference on Thursday.

The BA.4 and BA.5 sublineages, discovered in April, are strains that can reinfect those who have already had the original omicron strain, laboratory experiments have shown. On Wednesday more than 10,000 cases were recorded in South Africa, the highest daily number since January.

“Although cases have risen, hospitalization in South Africa remains low, with the number of patients currently admitted testing positive for Covid-19 at around 20% of the late December 2021 peak,” the WHO said. Eswatini and Namibia have also seen a 50% rise in cases over two weeks, it said.

Overall the continent recorded 52,878 cases in the week ended May, 8. That represented a 38% rise.

Twelve African countries, stretching from Algeria to South Africa, are experiencing a fifth wave of infections, John Nkengasong, the head of the Africa Centres for Disease Control and Prevention, said on a separate conference call.

(Updates with comments from WHO from third paragraph)