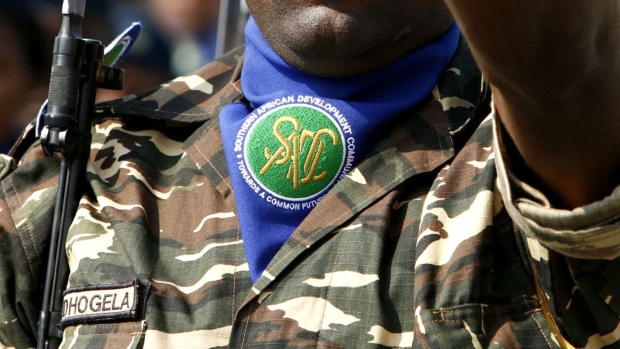 ZAMBIA - AUGUST 17: A soldier from the newly formed SADC peacekeeping force on parade in Lusaka, Zambia, on Friday, Aug.17, 2007. Leaders from 14 southern African nations presided over the creation of a joint military force today, declaring it ready for deployment in peacekeeping operations on the continent. (Photo by Peter Bauermeister/Bloomberg via Getty Images) Photographer: Bloomberg/Bloomberg , Photographer: Bloomberg/Bloomberg

(Bloomberg) -- Southern African Development Community troops helping to fight an Islamic State-linked insurgency in Mozambique’s Cabo Delgado province will remain in the country until the situation on the ground is under control, the regional bloc said.

SADC also plans to add more ground forces to hold onto areas retaken from the insurgents, Mpho Molomo, special representative of the chair of the bloc’s organ on politics, defence and security cooperation, told reporters Thursday in Maputo, Mozambique’s capital. Fighters are fleeing to Mozambican provinces of Niassa and Nampula, as well as islands off Cabo Delgado coastline and to neighboring Tanzania, he said.