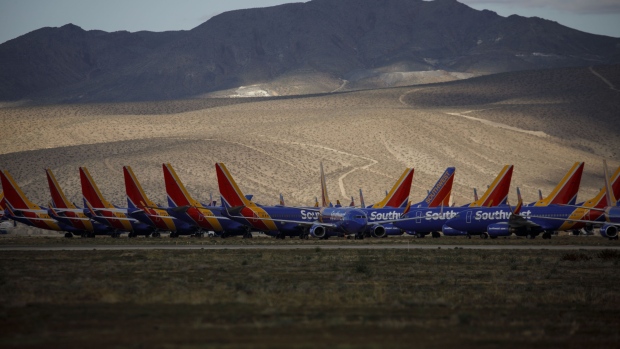 Some US$25 billion in bonds with embedded stock options have been issued this year, more than any other January through April period over the last 13 years. The rush of activity shows companies are prioritizing cash needs, topping up in capital markets in the wake of a trillion-dollar stimulus bill.

At the current pace of convertible issuance, the 2020 haul could hit US$75 billion on an annualized basis, says Steven Halperin, Barclays head of Americas equity-linked and hybrid solutions. That would not only top last year’s record, but also touch levels unseen since at least 2008, when some US$86 billion in deals were closed.

Southwest Airlines is the latest to launch a convertible offering, a piece of an overall financing package that includes straight debt and equity, following deals from Carnival Corp., and Booking Holdings Inc.

Pricing has been favorable, so far. Convertible offering terms on the table have become “materially wider” than average pre-pandemic terms, says Santosh Sreenivasan, JPMorgan’s head of equity-linked products, but strong demand from buyers helped many companies secure better terms than what they first shopped.

“That demonstrates the convertible market is open and ready,” Sreenivasan said.

The investment-grade crowd has been drawn to straight debt markets since the financial crisis when an era of uber-low interest rates was ushered in. At most, annual convertible deals have totaled US$56 billion since 2009. But as the S&P 500 swooned on pandemic fears and credit spreads in investment-grade debt widened, the promise of tighter spreads in convertibles is now attracting industries it hasn’t serviced in a decade.

Of the 18 convertible bonds issued since April, the vast majority of them have priced at the mid-point of where they were marketed, or better, showing the demand for convertible notes. A few companies, untouched by coronavirus, have even secured pre-pandemic terms -- 2 per cent coupons and conversion premiums, the price at which the embedded stock options come into play, in excess of 25 per cent.

Equity investors could be drawn into buying convertible bonds, especially among those who expect shares to pivot. Recovery-type trades -- if the company in question does recover -- offers more upside as the stock option within the convertible becomes more valuable, says Eli Pars, Calamos Advisors co-CIO, and head of alternative strategies.

Carnival’s stock didn’t have to move much for it to hit its convertible price of US$10. Meanwhile, Southwest’s convertibles is said to be marketed with a conversion premium of 30 per cent-35 per cent. Its shares are trading at US$29, but hit a high of US$58 as recently as mid-February.