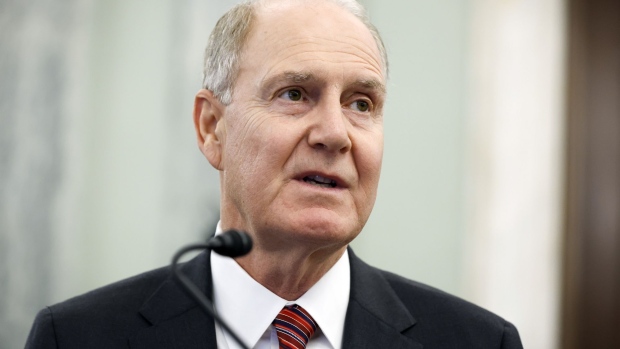 Gary Kelly, chief executive officer of Southwest Airlines Co., speaks during a Senate Commerce, Science and Transportation Committee hearing in Washington, D.C., U.S., on Wednesday, Dec. 15, 2021. Airline chief executive officers are testifying on how they used federal Covid-19 aid and are anticipated to defend their performance as lawmakers raise questions about how the payroll funds were used given widespread flight disruptions. , Bloomberg

(Bloomberg) -- Southwest Airlines Co.’s chief executive officer is weighing in again on measures to stop the spread of coronavirus -- and this time he’s firmly in the pro-mask camp as carriers struggle to cope with the omicron variant’s impact.

CEO Gary Kelly said on the airline’s quarterly conference call Thursday that now would not be the best time to lift a federal requirement for masks to be worn at all times on aircraft and in airports -- unless a person is eating or drinking. The mandate, which covers all transportation networks across the U.S., is set to expire March 18.

“Adding the mask is an added layer of safety, and given the fact that we’re right in the midst of this omicron surge, now’s not really the time to revisit that question, in our opinion,” Kelly said in response to a question from a reporter. “There will come a time when the mask won’t be necessary, and I think we’ll all look forward to that, but now is not the right time.”

Kelly’s comment follows his controversial remarks during a U.S. Senate committee hearing in December that masks didn’t add much, “if anything,” to fight the virus on airplanes. Kelly himself came down with Covid-19 days later.

About 5,000 Southwest workers fell ill with the omicron variant in the first three weeks of January, contributing to 5,600 flight cancellations. Its rapid spread has led to a slowdown in bookings and dropped trips this month and next. Kelly said Southwest’s surveys have shown a significant number of customers feel safer with masks.