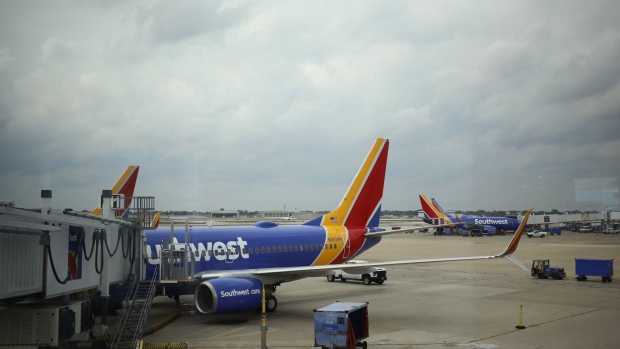 Southwest Airlines Co. Boeing 737 passenger jets parked on the tarmac at Midway International Airport (MDW) in Chicago, Illinois, U.S., on Monday, Oct. 11, 2021. Southwest Airlines Co. disruptions moved into a fourth day, with 355 canceled flights, or 10% of its daily schedule, on Monday, the latest in a series of setbacks at the carrier. Photographer: Luke Sharrett/Bloomberg , Bloomberg

(Bloomberg) -- Southwest Airlines Co. trimmed its flight schedule for the second time since August, cutting back on fourth-quarter flying as it struggles to hire enough workers and recover from customer anger over widespread delays.

Fourth-quarter capacity will decline 8% from pre-pandemic levels in 2019, compared with a prior plan for a 5% drop, the Dallas-based carrier said Thursday as it released third-quarter financial results. Southwest’s December flying will be about 12% lower than it was two years ago, following “aggressive” expansion in the third quarter.

The airline doesn’t expect to be profitable this quarter as costs to fly each seat a mile rise as much as 12%, Southwest said. Higher labor rates and airport costs, stepped-up hiring, employee incentives for coronavirus vaccinations and lower productivity are driving up the measure, an industry gauge of efficiency.

The decision to pare service highlights the difficulty that Southwest and other carriers have had adding workers since the summer, when demand surged more than expected after Covid-19 restrictions were lifted. Southwest has said that for the first time it faces significant competition from industries like retail and parcel shipping to lure entry-level employees.

“We have reined in our capacity plans to adjust to the current staffing environment, and our on-time performance has improved accordingly,” Chief Executive Officer Gary Kelly said in the statement. “Our 2022 capacity planning reflects more conservative staffing assumptions as well, all compared to historical norm.”

Southwest slipped 0.3% to $49.30 before the start of regular trading in New York. The shares advanced 6.1% this year through Wednesday, while the S&P 500 Airlines Index gained 6.6%.

The airline has been contending with unhappy customers whose travel was disrupted by thousands of flight cancellations over several days early this month. The mess, which reduced third-quarter revenue by $75 million, was partly blamed on crews being stretched too thin when weather and air-traffic control issues grounded planes. Southwest previously culled thousands of flights after employees complained about being overworked during the summer.

Southwest reported an adjusted third-quarter loss of $135 million, or 23 cents a share. Analysts had anticipated a 26-cent loss, according to estimates compiled by Bloomberg. Revenue was $4.68 billion, while Wall Street expected $4.64 billion.

The carrier said it’s “encouraged” with renewed momentum in leisure and business demand, revenue and bookings, particularly for the winter holidays. Travel dipped in the third quarter amid a surge in delta variant coronavirus cases, reducing revenue in that period by $300 million. An overhang into the current quarter will trim sales by about $100 million.