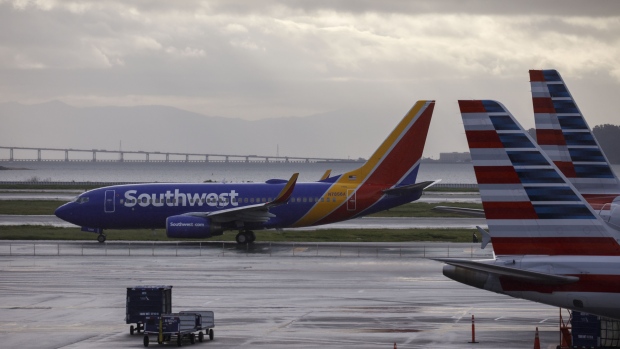 (Bloomberg) -- Southwest Airlines Co.’s pilots union stepped up its criticism of Boeing Co., saying the planemaker may be trying to rush the return to service of its grounded 737 Max.

In a message to members, the head of the Southwest Airlines Pilots Association said Boeing should never be given the benefit of the doubt again and criticized the manufacturer’s “arrogance” over the development and certification of the Max. Union president Jon Weaks also threw his support behind Southwest’s decision to consider flying planes made by a company other than Boeing.

The letter deepened the tension between Boeing and the pilots of the largest operator of the Max as the aircraft’s flying ban hits the eight-month mark. Southwest is the largest operator of Boeing’s best-selling jet, and the grounding reduced the carrier’s operating income by $435 million through September. Southwest has pulled the Max from its flight schedule through March 6 -- almost a year since the jet was grounded worldwide.

The Dallas-based airline said it supported Boeing’s work to update the Max, which suffered two fatal crashes in a five-month span. A total of 346 people were killed in the accidents.

“We are confident in the work being done to safely return the Max to service and continue to await additional guidance from Boeing and the FAA regarding timing and next steps,” Southwest said in a statement.

Boeing said the plane will only be certified to fly once regulators approve changes to make it safer. In both crashes, a sensor fed erroneous signals to a software system, which repeatedly pushed down the noses of the planes until pilots eventually lost control.

“We look forward to working with pilots, flight attendants and our airline customers to re-earn their trust,” Boeing said in a statement. “The Max will only be certified once regulators are completely satisfied that we have made all updates required and they determine the plane is safe to return to service.”

The company’s pilots sued Boeing last month to recover at least $115 million in lost pay and legal expenses through the end of this year, accusing the manufacturer of being too hurried in its debut of the Max because it was trying to stay competitive with rivals. In its haste, the planemaker withheld key information about a feature that contributed to two fatal crashes within five months, the union said.

“Boeing will never, and should not ever, be given the benefit of the doubt again,” Weaks, a Southwest captain, said in a message to members Wednesday. “The combination of arrogance, ignorance, and greed should and will haunt Boeing for eternity.”

Boeing said earlier this week that it expects U.S. aviation safety regulators will approve its redesign of the Max by the end of this year and finalize new training standards for the plane in January. Airlines will then need weeks or even months to get their planes back in the air. As a result, Boeing said it won’t ramp up production of the plane as previously planned to avoid stressing suppliers and airlines as they work on the plane’s return to service, or RTS.

“There is some concern that this is simply another tactic to push the RTS timeline up, force operators to resume making payments on Max aircraft, and transfer some costs, logistics, and responsibilities of storing and restoring the Max to revenue service to respective operators,” Weaks said in his message to pilots.

Weaks said he “strongly” agreed with Southwest’s decision to explore looking at “a different and perhaps non-Boeing aircraft for the best interest of all our futures.” The airline, which has always flown only Boeing planes, is preparing to review whether to add other aircraft types, potentially opening the door to purchases from Airbus SE.