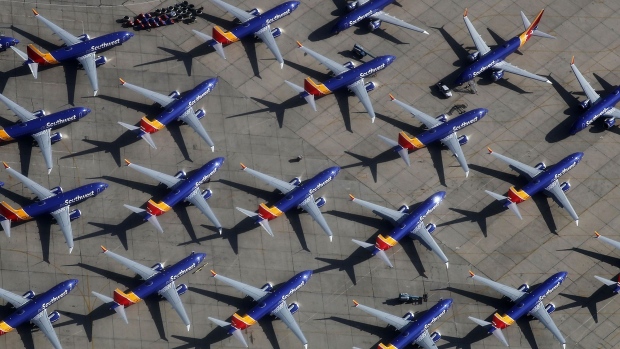 (Bloomberg) -- Southwest Airlines Co.’s pilots don’t expect to see Boeing Co.’s 737 Max resume flights until February “at least,” given work still to be done in a process fraught with safety concerns and politics.

That’s well beyond the Jan. 6 date the carrier has set for the grounded plane to be back in its schedule. But ending a global flying ban, enacted in March after two fatal crashes, probably will be delayed by the “many official processes and events” that must take place among regulators globally, Jon Weaks, head of the Southwest Airlines Pilots Association, said Monday.

Southwest is the largest operator of the Max, and the union recently sued Boeing for at least $115 million in lost pay through the end of this year from the grounding -- which according to the pilots has caused 30,000 flight cancellations at the Dallas-based carrier. The company has said that parking its 34 Max planes and not getting new ones scheduled for delivery this year has cut at least $225 million from operating income.

Investors and analysts have largely focused on the FAA’s certification of the safety of the Max as a catalyst for the plane’s return -- and a rally in Boeing’s shares. But there will still be months more of work after that point before the planes are flying passengers, according to the timeline laid out by Weaks, a Southwest captain, in a message to union members.

First, Boeing has to finish its work and submit software to regulators that revamps MCAS, the system implicated in both crashes, as well as the flight control system architecture. There’s also the possibility that issues flagged in two recent reports by the National Transportation Safety Board and an international consortium of technical experts will prompt additional scrutiny.

A Boeing spokesman couldn’t immediately be reached for comment.

Regulators may hasten the jet’s return by working concurrently on different steps. But here’s how the process could play out, according to the Southwest pilots union, which represents aviators at the largest Max customer:

To contact the reporters on this story: Mary Schlangenstein in Dallas at maryc.s@bloomberg.net;Julie Johnsson in Chicago at jjohnsson@bloomberg.net