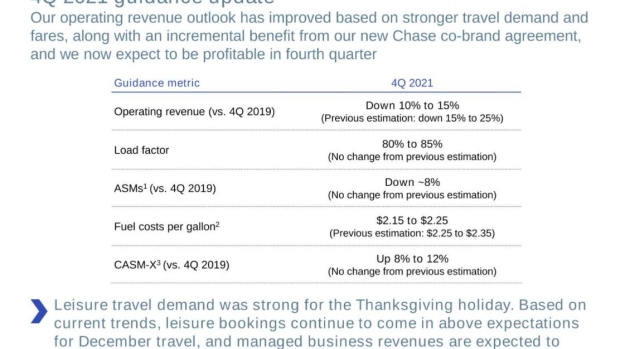 (Bloomberg) -- Southwest Airlines Co. said it expects to be profitable this quarter and for all of next year, on its way toward generating as much as $1.5 billion in earnings and paying dividends in 2023.

The discount carrier revised its fourth-quarter outlook after a booming Thanksgiving holiday, saying revenue would fall as much as 15% from pre-pandemic levels. Southwest previously said sales could tumble as much as 25% and that it didn’t expect to post a profit this quarter.

That surge in demand and higher fares overcame effects of the coronavirus delta variant that had swept through the U.S., quashing ticket sales and leading to cancellations earlier in the fourth quarter. Flight capacity will remain 8% below the 2019 level, the company said in an investor presentation Wednesday. Unit costs excluding fuel will rise as much as 12%, in line with an earlier outlook.

The carrier last paid a dividend in March 2020, near the start of the global pandemic. It also may restart share repurchases based on free cash flow and debt repayments, the airline said in a presentation for investors Wednesday. U.S. carriers that took financial aid from the government were prohibited from paying dividends or buying back shares for a specified period.

Southwest shares rose less than 1% to $45.30 before the start of trading in New York. The company laid out its five-year plans as Bob Jordan prepares to become chief executive officer on Feb. 1, replacing Gary Kelly after 17 years at the helm of the airline.