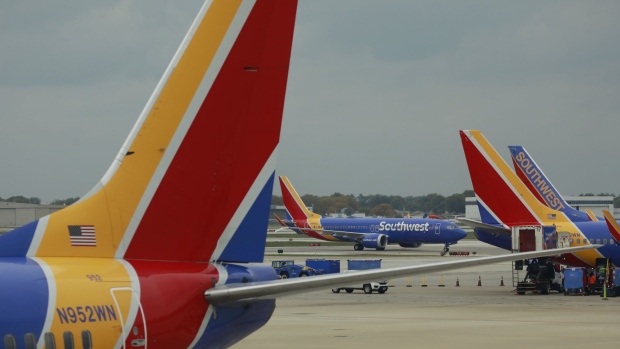 Southwest Airlines Co. Boeing 737 passenger jets parked on the tarmac at Midway International Airport (MDW) in Chicago, Illinois, U.S., on Monday, Oct. 11, 2021. Southwest Airlines Co. disruptions moved into a fourth day, with 355 canceled flights, or 10% of its daily schedule, on Monday, the latest in a series of setbacks at the carrier. Photographer: Luke Sharrett/Bloomberg , Bloomberg

(Bloomberg) -- Southwest Airlines Co. said it would reinstate its dividend following a pause of more than two years, becoming the first major US carrier to resume the shareholder payouts after they were suspended during the pandemic as a condition of receiving government aid.

Southwest’s board approved a quarterly dividend of 18 cents a share to be paid on Jan. 31, according to a statement Wednesday. The airline had notched a string of consecutive quarterly payouts for 43 years that ended in early 2020 as pandemic lockdowns began. The restriction on dividends tied to US financial aid ended in September of this year.

The resumption “reflects the strong return in demand for air travel and the company’s solid operating and financial results since March 2022,” Chief Executive Officer Bob Jordan said in the statement.

US carriers have expressed confidence that the ongoing rebound in demand from both leisure and business travelers will continue into 2023 despite the possibility of an economic recession. With the industry finding its footing following a slump early in the pandemic, Southwest had hinted on recent investor calls at its eagerness to bring dividends back.

Some small carriers have recently emphasized shareholder-focused actions. Sun Country Airlines Holdings Inc. in November announced plans for a $50 million share repurchase, while Allegiant Airlines’ parent Allegiant Travel Co. said it would resume a suspended buyback plan with $54 million remaining. Such purchases also were temporarily prohibited for carriers that received a portion of about $54 billion in federal aid during the pandemic.

Southwest on Wednesday also reiterated financial forecasts for the fourth quarter. In presentation materials ahead of an investor meeting, Southwest said unit costs excluding fuel that have remained elevated should decline as much as 3% for full-year 2023 as flying capacity expands by about 15% from this year.

Southwest will boost capital spending to between $4 billion and $4.5 billion in 2023, and expects to average about $4 billion annually in 2024 through 2026 as it takes new aircraft to replace its aging Boeing Co. 737-700 fleet. The airline also will step up debt repayments now scheduled for 2025 and 2026 as it reverts to a long-term minimum cash balance target of $6 billion plus a revolving credit agreement, down from $13.5 billion.

Southwest said it won’t achieve a productivity goal of 80 employees per plane next year as it continues to add thousands of workers and recent hires gain experience, and because of delays in receiving new Boeing aircraft and retiring older ones.

The carrier’s growth has been constrained this year by a lack of trained pilots, leaving it with at least 40 parked or under-used planes. Southwest depends on high efficiency rates to keep costs low, and said it expects to achieve other metrics related to flying per aircraft, average trips per airport gate and miles flown per gallon of fuel.