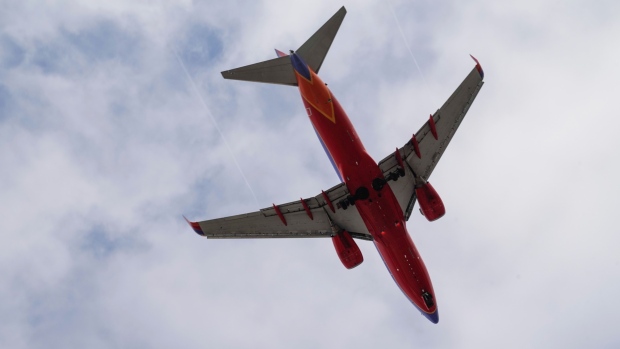 Southwest Airlines Co. expects to fly about the same capacity in late 2020 as it did a year earlier, projecting that business and holiday travel will return as the economy recovers from the coronavirus pandemic.

“We see demand slowly improving. It still has a long way to go,” said Chief Commercial Officer Andrew Watterson. “November-December is the end of a ramp that started in May and continues throughout the year.” He cautioned that the comparative level for 2019 was depressed by the global grounding of Boeing Co.’s 737 Max, which Southwest expects to get back in the air before the year is over.

Southwest will focus on adding capacity toward year-end in Denver, Las Vegas, Phoenix and Nashville, Tennessee, tapping leisure and domestic business demand, which typically recover first in a downturn, Watterson said in an interview Thursday.

The capacity outlook was more optimistic than the view among other U.S. airlines, which have reported small increases in bookings and passengers from April, when the pandemic drove demand down more than 95 per cent from a year earlier. Travel remains well below last year’s levels. And the largest carriers have offered employees leaves or early retirement while projecting that demand could take as much as three years to fully recover.

“Industry demand could still be down and it would be fine for us to have what we have out there” in terms of capacity plans, Watterson said. “Whatever demand materializes, we’ll adjust to it.”

Southwest’s May capacity, a measurement of each seat flown a mile, is down about 70 per cent from a year ago, while June will be off about 50 per cent. Consumers have been responding to a recent Southwest fare sale and a loyalty points promotion, he said in a May 23 video to employees.

Southwest’s new schedule assumes that the airline will resume flying the Max in the second half of December, Watterson said. Boeing on Wednesday resumed production of the narrow-body jetliner, which has been grounded since March 2019 after two deadly crashes.

Southwest, the biggest operator of the Max when it was grounded, has said it expects no more than 48 deliveries of the Max through next year, down from an expectation before the flying ban of 123 planes.

Boeing has targeted the Max’s return for the third quarter, pending regulatory approval.

Watterson made his comments as the Dallas-based airline published its flight schedule for Oct. 31 through Jan. 4. Southwest also delayed about a month to July 1 its resumption of regular service to Hawaii; Havana; Montego Bay, Jamaica; Nassau, Bahamas; and Cancun and Los Cabos in Mexico. International service primarily depends on government-imposed travel restrictions related to the pandemic.