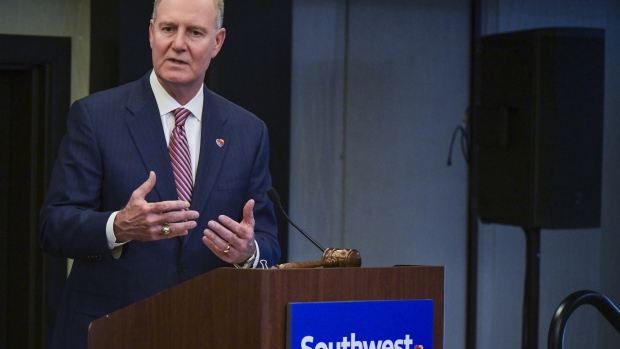 Gary Kelly, chairman of the board and chief executive officer of Southwest Airlines Co., speaks during the company's annual shareholders' meeting in Denver, Colorado, U.S., on Monday, May 15, 2019. Photographer: Michael Ciaglo/Bloomberg , Mary Schlangenstein

(Bloomberg) -- Southwest Airlines Co., which has tied all of its future growth to the grounded Boeing Co. 737 Max, says the aircraft’s return to the skies this summer is still within reach.

The largest operator of the Max is banking on strong summer travel to help make up for lost sales and higher costs linked to the aircraft’s grounding, which began in March after the second deadly crash in five months. Boeing is finalizing changes to software implicated in both accidents, and the U.S. Federal Aviation Administration expects to receive the update as soon as next week.

U.S. regulators will then begin a review that includes test flights and input from a technical advisory board. The FAA will host its counterparts from around the world to discuss the Max at a meeting May 23 in the Dallas-Fort Worth area. Southwest last month removed the Max from schedules through August 5.

Southwest rose less than 1% to $52.01 at the close in New York. The shares have climbed 12% this year, the biggest gain on a Standard & Poor’s index of the five largest U.S. carriers.

It’s premature to specify what reimbursement Southwest will consider seeking from Boeing because of the grounding, Kelly said. The Dallas-based carrier, which has an all-737 fleet, has always flown only Boeing airplanes.

Kelly said last month that there was no guarantee Southwest would remain an all-737 operator in “perpetuity,” adding that the airline “constantly” looks at aircraft from other manufacturers, including Airbus SE.

“Obviously no one on the planet is happy about this situation, least of all us as an all-Boeing 737 customer,” he told shareholders. “All of our growth is in the 737 Max. They’ve made some mistakes, they’ve admitted to those mistakes and they need to be addressed. We’ll do what we need to do to protect our company and our shareholders.”

Kelly said he would “love to” fly on Southwest’s first Max flight when the grounding ends. He said he was working with Boeing, regulators and other airlines to plan the return to service and discuss how to allay travelers’ potential fear of flying on the Max.

“We will do everything we feel like we need to do to instill confidence not only in the airplane, but in Southwest Airlines,” he said, describing an effort that will include training and involve employees. “Our confidence level will be high or we won’t fly the airplane.”

Parking the planes in the California desert forced Southwest to cancel about 130 flights a day until about mid-April, when it removed the Max from schedules through early August. The grounding is also cramping the airline’s growth this year and slowed its expansion of service to Hawaii.

Southwest pilots already train for faulty sensor data and vertical-stabilizer movements that weren’t commanded -- both of which were issues faced by aviators in the Lion Air and Ethiopian Airlines crashes.

In those accidents, erroneous readings from a single sensor triggered software known as MCAS, which pushed down the nose of each aircraft until pilots lost control. The disasters killed 346 people.

Training at Southwest “is already very comprehensive,” Kelly said. “We don’t know what training is like for Lion Air pilots or Ethiopian pilots. We have no way of knowing how well prepared they are.”

Southwest and its pilots union have received subpoenas in a federal grand jury investigation into the Max, as have aviator groups at United Continental Holdings Inc. and American Airlines Group Inc.

To contact the editors responsible for this story: Brendan Case at bcase4@bloomberg.net, Molly Schuetz