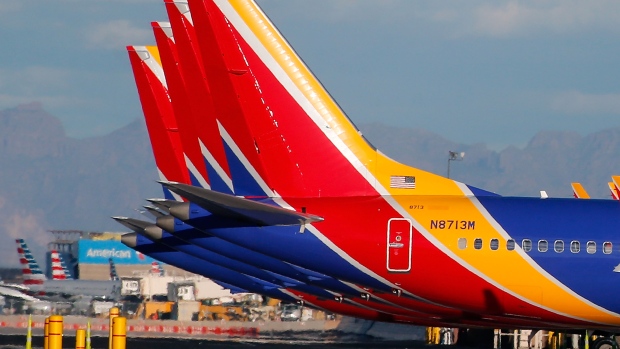 Southwest Airlines Co. (LUV.N), the biggest operator of the Boeing Co. (BA.N) 737 Max, slumped as the company removed the plane from its flight schedule through Jan. 5, becoming the first U.S. carrier to drop the grounded aircraft for the rest of this year.

The airline expects U.S. regulators to approve a Max return to service in the fourth quarter, echoing Boeing’s estimate. But it will take as much as two months to comply with any changes ordered by authorities, such as pilot training, and to ready aircraft, Southwest said Thursday as it announced second-quarter financial results.

Southwest’s operating income was reduced by US$175 million last quarter as it parked its 34 Max jets and didn’t receive ones it had ordered. The grounding will continue to cut flight and seating capacity this year, raise costs and spurred the carrier to end service at Newark Liberty International Airport in New Jersey. The Max has been grounded worldwide since March 13, after two crashes killed 346 people.

The shares tumbled 4.8 per cent to US$52.10 before the start of regular trading in New York. Southwest gained 18 per cent this year through Wednesday, in line with a Standard & Poor’s index of the five biggest U.S. carriers. Boeing shares were little changed early Thursday.

Southwest has held early talks with Boeing about compensation for damages related to the Max grounding, although no agreement has been reached. Southwest Chief Executive Officer Gary Kelly has expressed frustration, telling employees this week that the longer the Max is parked, the more difficult it becomes to manage. Boeing has taken a US$4.9 billion after-tax charge to cover potential concessions to Max customers.

Southwest previously had pulled the plane from schedules through Nov. 2, a move that would have increased daily Max-related cancellations to 180 from the current 150. American Airlines Group Inc. and United Airlines Holdings Inc. have taken the Max out of their schedules through early November.

The extended grounding means Southwest’s flight and seat capacity will shrink this year by one per cent to two per cent, compared with original plans to expand five per cent. The airline’s eight daily departures from Newark will be consolidated with its operations at New York’s LaGuardia Airport as of Nov. 3.

While the airline said the decision was among “necessary steps to mitigate damages and optimize our aircraft and resources,” it also acknowledged financial results from the airport had been below expectations. Southwest started flights at Newark in 2011.

To help cover the Max flying void, the Dallas-based airline also will defer the retirement of seven Boeing 737-700s.

There’s a slim silver lining from the grounding. With fewer seats for sale amid high travel demand, airlines have been able to raise fares and still fill planes. Revenue for each seat flown a mile, a gauge of pricing power, increased 6.8 per cent last quarter and will rise as much as 5 per cent in the current quarter from a year earlier, Southwest said. The number of filled seats hit a quarterly record of 86.4 per cent for the period through June.

But parking the Max also means spreading operating expenses across fewer seats. Southwest’s cost to fly each seat a mile, an efficiency measure, will rise nine per cent to 11 per cent in the current quarter, excluding fuel and profit sharing. Before the Max grounding, Southwest expected the measure to rise two per cent. So-called unit costs will increase as much as 10 per cent this year.

Second-quarter earnings rose to US$1.37 a share, compared with the US$1.34 average of analyst estimates compiled by Bloomberg, Southwest said. Revenue rose to US$5.9 billion, just shy of expectations for $5.94 billion.