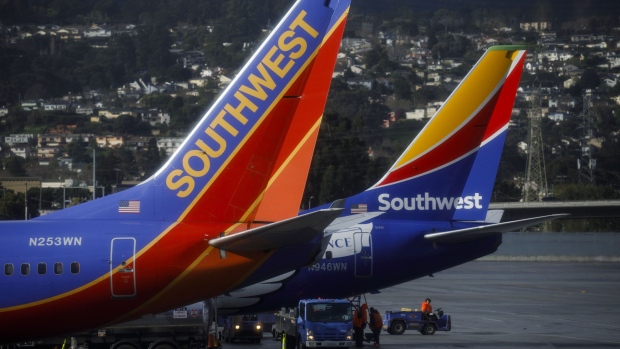 Southwest Airlines Co. said it will remove Boeing Co.’s 737 Max from its flight schedules through March 6, almost a year since the jet was grounded worldwide after two deadly crashes.

The planned change is due to “continued uncertainty around the timing of Max return to service,” the carrier said in a regulatory filing Friday. Southwest, the largest operator of Boeing’s best-selling plane, last month pulled the aircraft from its schedule through Feb. 8.

Southwest has signaled rising frustration with the worsening delays in Boeing’s effort to win safety regulators’ approval for the Max to resume flights. The jetliner was grounded March 13, after accidents at Indonesia’s Lion Air and Ethiopian Airlines killed 346 people. While Southwest has always had an all-Boeing fleet and has tied its future growth to the Max, the airline recently said it would review whether to add other aircraft types.

Boeing has targeted this quarter for the narrow-body plane to be cleared to fly again, which requires Federal Aviation Administration approval of new software and other changes meant to avoid a repeat of the disasters. In both crashes, a sensor fed erroneous signals to flight-control software, which repeatedly pushed the plane’s nose down until pilots eventually lost control.

After the grounding is lifted, Southwest expects it will need a month or two to return its Max jets to passenger service.

Southwest parked its 34 Max planes in March, and had been scheduled to receive 41 more this year. The airline is still targeting seven Max deliveries this quarter, with the remaining 34 pushed into 2020, but said it “offers no assurances that current estimations and timelines are correct.”

United Airlines Holdings Inc. has pulled the Max from its schedule until Jan. 6, while American Airlines Group Inc. is planning on the jet being absent through Jan. 15.