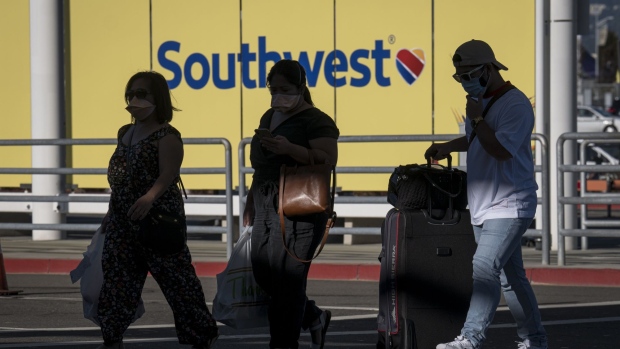 Southwest Airlines Co. dramatically expanded its furlough warnings, telling employees that 6,828 jobs are at risk as the company and its labor unions have failed so far to agree on how to cut US$500 million in costs.

Pilots, flight attendants, baggage handlers and other workers got notices Thursday that they may be furloughed, Southwest said. The new warnings boosts the number of people at risk of being cut between January and April 1 to 7,273, or nearly 13 per cent of the workforce.

Southwest’s inability to secure a 10 per cent reduction in 2021 spending for each work group means the company is on the brink of its first involuntary job cuts in its 49-year history. With the coronavirus pandemic keeping travel demand at about 40 per cent of last year’s levels, the airline says it has 20 per cent more employees than it needs -- at an expected cost next year of US$1 billion.

“We are willing to continue negotiations quickly to preserve jobs if we can achieve the support that allows Southwest to combat the ongoing economic challenges,” Russell McCrady, vice president of labor relations, said in a statement by email.

The latest notices were the third batch in four weeks that Southwest has sent warning of potential layoffs. The earlier letters went to 445 mechanics, employees who manage parts inventory, technicians who clean aircraft and other workers. Talks began in October, with the goal of securing agreements by the end of that month. The carrier earlier reached deals with two small work groups.

The airline is pushing for concessions despite recent progress toward a coronavirus vaccine, movement toward a possible extension of federal payroll aid for carriers, and the potential for rising passenger demand in the spring, said Jon Weaks, president of the Southwest Airlines Pilots Association.

“This is just a scare tactic and a lot of vindictiveness on their part,” he said in an interview. “We view it as a heartless negotiating stick in the eye.” The union has no talks scheduled with Southwest, he said.

Southwest and the Transport Workers local representing ramp, provisioning and freight employees are within about US$10 million of reaching the US$70 million in reductions sought by the carrier, said Charles Cerf, president of the unit. The airline has declined to give the group credit for US$100 million in savings previously secured through voluntary early retirements and long-term leaves and has rejected other cost-cutting proposals, he said.

“We believe they’re using this furlough to try to bully the unions,” Cerf said in an interview. The union is working with Southwest to set more talks. The TWU local for flight attendants didn’t immediately respond to a request for comment.

The layoffs could be prevented if Congress approves a new financial stimulus package that includes additional financial aid to help cover airline payroll costs. Employees must be notified of potential furloughs as much as 90 days in advance.

Southwest has said it would burn as much as US$11 million a day from October through December. The Dallas-based company reported a US$1.2 billion adjusted loss in the third quarter.

Since seniority provisions for some unions mean Southwest can’t know which individuals ultimately will be let go, 7,990 workers got the latest notices that they could be affected. About 17,000 employees already have left Southwest temporarily or permanently through voluntary programs.