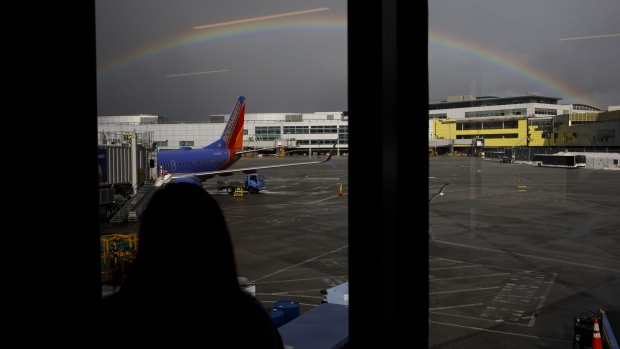 A passenger looks out as a Southwest Airlines Co. Boeing Co. 737-700 jet aircraft stands on the tarmac beneath a rainbow at San Francisco International Airport (SFO) in San Francisco, California, U.S., on Wednesday, March 27, 2019. The ban on Boeing 737 Max flights plus soft leisure-travel demand will shave $150 million from Southwest's first-quarter revenue. , Bloomberg

(Bloomberg) -- Southwest Airlines Co., the largest operator of Boeing Co.’s 737 Max, expects regulators will certify the grounded jet to resume flight before Thanksgiving in the U.S., clearing the way for much-needed new deliveries by year’s end.

“We’re assuming that we will have the go-ahead to return the Max to service by, call it the beginning to mid-November,” Southwest Chief Financial Officer Tammy Romo said Wednesday at a Cowen & Co. transportation conference in Boston.

United Airlines Holdings Inc. also is eager to get more of the workhorse narrow-body jet, which has been grounded worldwide since March after two crashes killed 346 people. Boeing has made changes to the flight-control system implicated in the disasters and has estimated that the Max would return to service early in the fourth quarter.

Southwest -- which had 34 Max aircraft in its fleet when the plane was grounded -- has removed the jet from its schedule until Jan. 5. The airline had expected to receive 16 more this year.

The plane represented 8% of Southwest’s capacity, and the grounding has increased costs while it decreased revenue, Romo said. Southwest in July said Max woes had cut $225 million from 2019 operating income.

The airline will reintegrate the Max in “a very controlled and organized way and ramp up in a manner that we think is prudent,” she said. Investors have expressed concern that a glut of 737s returning to schedules as travel demand typically wanes could pressure fares.

The Dallas-based carrier hopes to get “back on track” with its Max delivery schedule by the middle or end of next year, Romo said. Six shipments scheduled for 2020 could shift into the following year, she said.

United had been expecting to get 30 new Max jets this year and is ready to begin discussions with Boeing about its schedule for preparing built-but-undelivered planes for customers, said Gerry Laderman, the airline’s finance chief.

“We’ve told them that from our perspective, nothing prevents us from physically taking as many aircraft as they can deliver to us,” he said at the conference. “They’re going to be the constraint on that.”

Alaska Air Group Inc. said two of its three Max deliveries planned for 2019 are now “officially late” and a third is likely to be as well. The carrier plans to fly 11 Max planes by the end of next year, part of a firm order for 36.

“We’re confident in the Max,” said CFO Brandon Pedersen. “It’s going to be a great airplane for us.”

To contact the editors responsible for this story: Brendan Case at bcase4@bloomberg.net, Tony Robinson, Susan Warren