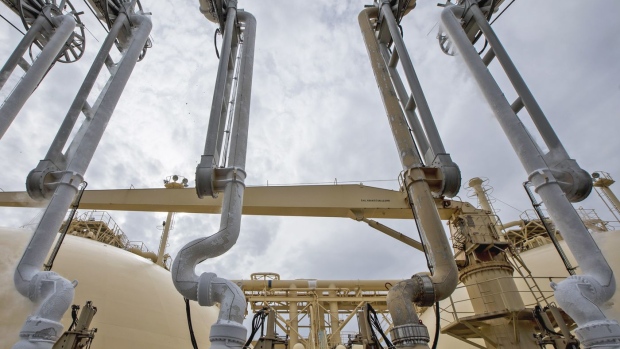 Liquefied natural gas (LNG) dispenses through pipes on-board the Gallina LNG tanker after docking at the National Grid Plc's Grain LNG plant on the Isle of Grain in Rochester, U.K., on Saturday, March 4, 2017. The shipment to England on the Gallina was priced using the U.K.'s National Balancing Point, where front-month gas cost about $7 a million British thermal units on Feb. 7. Photographer: Bloomberg/Bloomberg , Photographer: Bloomberg/Bloomberg

(Bloomberg) -- Mozambique has trimmed the proportion of revenue it intends to direct toward a sovereign wealth fund that’s being set up to help manage an estimated $96 billion expected to flow from its fledgling natural gas industry, a draft law shows.

The state will channel 40% of total oil and gas revenue to the fund for the first 15 years, and 50% thereafter, according to a copy of the unpublished bill seen by Bloomberg. A 2020 outline of how the fund would work stated that the gas revenue would be evenly split between the government and the fund for the first two decades, whereupon the fund’s share would increase to 80%.

The government plans to submit the proposed legislation to parliament by the end of December, according to the finance ministry.

The southeast African nation is poised to become a liquefied natural gas exporter as prices for the fuel surge following Russia’s invasion of Ukraine.

Mozambique is emerging from years of economic turmoil caused by a sovereign debt scandal, a rampaging Islamic State-linked insurgency, natural disasters and the pandemic. The establishment of the wealth fund is a key part of a deal the government reached this year with the International Monetary Fund, which froze a previous funding package in 2016 because of the debt scandal.

The draft law contains additional detail on how the fund will be run and structured. The finance ministry will be in charge of establishing an advisory board, comprised of independent finance experts, and preparing its investment policy. The central bank will manage its operations, while lawmakers will provide oversight together with an independent committee that will include members from civil society.

Banco de Mocambique estimated two years ago that the nation would earn $96 billion over the life of the LNG projects planned by companies including TotalEnergies SE and ExxonMobil Corp. along its northern coastline. Violence from an Islamic State-affiliated group has since held up progress on the two biggest projects. Only the smallest LNG export facility led by Eni SpA is on schedule and should start producing within weeks.

Mozambican President Filipe Nyusi has stressed that the nation needs to manage expectations around the projects. Significant revenues will only come after 2024, he said in August.

Other key points in the draft bill: