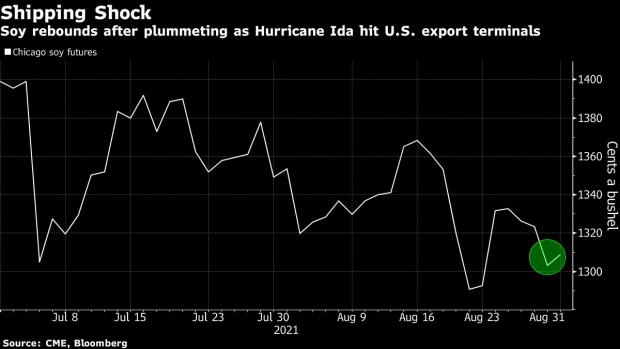 (Bloomberg) -- Soybean and corn prices edged up in Chicago as investors weighed the aftermath of Hurricane Ida after it ripped through key agriculture terminals in Louisiana.

The tempestuous weather is shaking up grain exports in the U.S.’s busiest agricultural port, a problem that could balloon as the peak harvest season looms. Soy and corn futures recovered some of Monday’s losses amid prospects that disrupted U.S. shipments would cause supply to back up.

“Hurricane Ida has done considerable damage in the area around New Orleans and Baton Rouge,” Commonwealth Bank of Australia strategist Tobin Gorey said in a note. “What specific damage has been to U.S. crop export facilities is unclear for now - as is the period of shipping delays.”

Some of the biggest trading houses, including Archer-Daniels-Midland Co., Bunge Ltd. and Cargill Inc., are assessing damages to grain elevators and port terminals. Cargill’s port facility in Reserve, Louisiana, sustained significant damage and there’s no timetable for restarting.

Elsewhere, Canada, the world’s biggest canola grower, expects to harvest its smallest crop of the oilseed in nine years after high temperatures and drought slashed yields.

In China, a relentless rout in hog prices has prompted the government to intervene again. The nation is planning to buy more pork for state reserves to support the market.