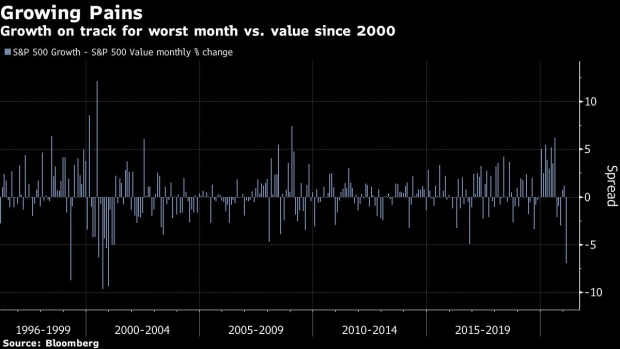 Signage is displayed outside the Nasdaq MarketSite in the Times Square neighborhood of New York. , Bloomberg

(Bloomberg) -- Casualties are piling up across the stock market as bond yields rise.

The Nasdaq 100, down for a sixth straight day, has lost nearly $1 trillion in value. Growth stocks, by one measure, are in the midst of their worst month since the dot-com days. Speculative areas of the market including SPACs and newly public companies are facing harsh blows. This all as benchmark 10-year Treasury yields have pushed to the highest level in a year.

“A confluence of events has triggered this mini tech wreck: Steady vaccinations, improving economic fundamentals, earnings upside, plus another fiscal stimulus around the corner,” said Mike Bailey, director of research at FBB Capital Partners. “The icing on the cake has been a surge in interest rates.”

Below is a sampling of pockets of the market getting hit hardest in the rate-induced selloff.

Not everything was hit equally by rising rates and inflation expectations. Rather, underneath the equity market’s surface, a rotation was afoot from high-flying growth companies to beaten down value shares. As of mid-Tuesday morning, the S&P 500 Value Index was up 6.7% in February whereas its growth counterpart was trading lower -- the largest monthly spread in favor of value since December 2000.

Investors who recently loaded up on technology shares are now feeling the pain as yields push higher. Over the past six weeks, a record $19 billion flowed into these funds, according to EPFR global data compiled by Bank of America Global Research. The S&P 500 information technology sector fell for a sixth straight day Tuesday, the longest losing streak since August 2019.

“Tech has definitely been against the ropes and it all has to do with the rising rate environment as the math starts to change here,” Emily Roland, the co-chief investment strategist for John Hancock Investment Management, said on Bloomberg Television. “The idea before was that rates were so low, what else were you going to buy? And if you think about the longer-duration nature of a lot of these technology plays, when you start to raise the discount rate, the net-present value goes down.”

Shares with heavy hedge-fund ownership sold off, a sign that the fast money may be behind the rout. Russell 1000 companies in the top quintile of fund holdings dropped 2%, more than double the losses seen among those with the lowest ownership, data compiled by Bloomberg show.

Stocks beloved by day traders also bore the brunt of selling as investor sentiment soured. A Goldman Sachs basket of retail favorites tumbled about 3% for the second-worst performance of this year.

As the Nasdaq 100 plunged as much as 3.5% Tuesday morning, the tech-heavy benchmark broke through its 50-day moving average for the first time since November. The index pared losses to trade just about in-line with the trend-line as of 10:50 a.m. in New York.

For Willie Delwiche, an investment strategist at All Star Charts, the next point of support -- should the selloff deepen -- is 12,250. That represents early December lows and would constitute a 6% drop from current levels.

“Some of the momentum in tech has waned,” he said by phone. “Improving economic conditions have made things like industrials and financials and energy more attractive. And then you have on top of this the rise in bond yields that I think is an acute pinch-point for tech right now.“

The IPOX SPAC Index, which tracks the performance of a broad group of special purpose acquisition companies (SPACs), fell as much as 11.8% Tuesday, the most on record, before paring losses to trade 5% lower as of 10:58 a.m. in New York.

“That shine and that allure can come off that asset class because there were just a staggering number of SPACs getting raised every day this year,” said Andrew Mies, chief investment officer at 6 Meridian, in a phone interview. “It’s crazy, there’s just not that many great companies that need to go public.”

The Renaissance IPO ETF, which tracks newly public companies, was under pressure too. After a 4.9% drop Monday, the fund fell as much as 8.6% Tuesday morning before paring much of the losses.