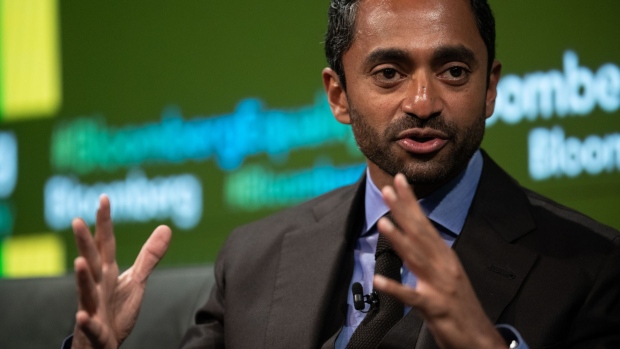 Chamath Palihapitiya, founder and chief executive officer of Social Capital LP, speaks during the Bloomberg Business of Equality conference in New York, U.S., on Tuesday, May 8, 2018. The conference brings together business, academic and political leaders as well as nonprofits and activists to discuss the future of equality, how we get there and what is at stake for the economy and society at-large. , Bloomberg

(Bloomberg) -- The “SPAC King” Chamath Palihapitiya is asking investors for more time to complete a pair of blank-check deals as the industry is plagued by a regulatory crackdown and broader malaise.

The moves come with just over 60 days until the SPACs need to complete a deal or risk being liquidated. Billionaire Bill Ackman returned a record $4 billion to investors last month, while a blank-check firm backed by billionaire Sam Zell’s Equity Group Investments laid out plans to do the same on Tuesday.

SPACs are known as blank checks because they raise money in initial public offerings with the goal of helping take an unidentified company public. They typically get a short window to either buy something with the money they raise -- typically two years -- or risk having to return the money to investors and close up shop. Management teams can get short extensions to find and close deals, but they usually have to pay shareholders for this as well as get their approval.

Warrants tied to Social Capital Hedosophia VI rose 47% to 39 cents as those tied to Social Capital IV rallied 58% to 30 cents on thin volume in late trading as investors took the filings as a signal that Palihapitiya and his teams may be able to get deals done. The warrants entitle holders to buy more shares if the stock rises above a certain price and dangle the prospect of an extra windfall for anyone who bets on a SPAC. However, they’re worthless if a SPAC is forced to liquidate.

Palihapitiya helped take SPACs mainstream, raising a more than $5 billion across the ten blank checks he has led, successfully taking public space tourism company Virgin Galactic Holdings Inc. and SoFi Technologies Inc. Since the start of the industry’s mania in 2020 more than 900 US SPACs have raised a combined $258 billion in initial public offerings, more than double the six-times the capital raised in the five years prior, data from SPAC Research show.