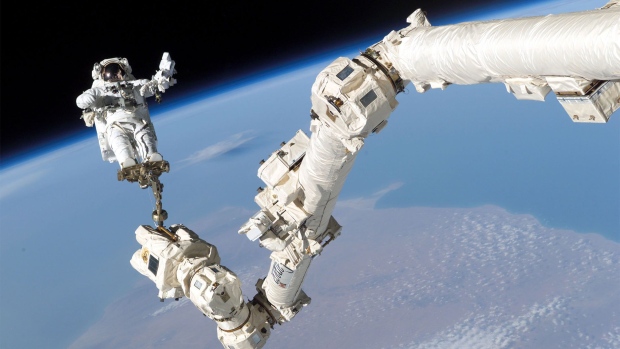 An Astronaut is anchored to the Canadarm2 on the International Space Station. , Source: NASA/Getty Images

Canadian space technology firm MDA Ltd. raised $400 million (US$320 million) in its initial public offering, falling about 20 per cent below its targeted amount after selling shares for less than expected.

The company, best known for developing a giant robotic arm used in space, sold about 28.6 million shares for $14 each, below its marketed range, according to final sale documents. MDA had sought to raise about $500 million by selling shares for $16 to $20 apiece, according to earlier materials.

MDA will list on the Toronto Stock Exchange under the ticker symbol MDA, marking a return for an iconic Canadian company once known as MacDonald, Dettwiler and Associates. The IPO values the Brampton, Ontario-based company at $1.6 billion when the sale closes around April 7, based on about 115 million shares outstanding.

The banks that arranged the sale have an option to sell an additional 15 per cent of the offering after the close, which could lift proceeds to $460 million. The IPO was led by Bank of Montreal, Morgan Stanley and Bank of Nova Scotia.

MDA plans to use about $340 million of the proceeds to repay debt and the rest to fund ongoing growth initiatives, including the development of a next-generation commercial satellite, according to the filing.

MDA specializes in space robotics, satellite systems and satellite imagery analysis. Its products include a global maritime information platform for vessel detection and climate monitoring, sensors for space missions and the robotic Canadarm used in NASA’s Space Shuttle program and later on the International Space Station.

--With assistance from David S. Joachim.