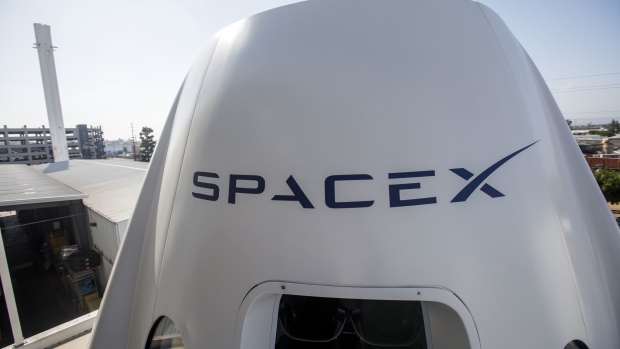 A mock up of the Crew Dragon spacecraft is displayed ahead of the NASA Commercial Crew Program (CCP) astronaut visit at the Space Exploration Technologies Corp. (SpaceX) headquarters in Hawthorne, California, U.S., on Monday, Aug. 13, 2018. Astronauts on SpaceX's Crew Dragon will be the first to fly on an American-made, commercial spacecraft to and from the International Space Station on their mission scheduled for April 2019. Photographer: Patrick T. Fallon/Bloomberg , Bloomberg

(Bloomberg) -- SpaceX employees are offering to sell shares via a private placement that would value Elon Musk’s launch and satellite company at around $125 billion, according to people familiar with the matter.

The shares are being offered in a so-called employee tender at $70 each, the people said, asking not to be identified because the details are private. That compares with a split-adjusted $56-a-share during a sale in October at a valuation of about $100 billion.

It’s unclear whether Musk is selling stock as part of the employee tender, the people said. The size of the offering couldn’t immediately be determined.

Musk has been seeking a variety of funding sources to complete his agreement to purchase Twitter Inc. On Monday he suggested the deal for the social media platform might be completed at a lower price, days after he questioned Twitter’s ability to estimate how many accounts are spam or fake.