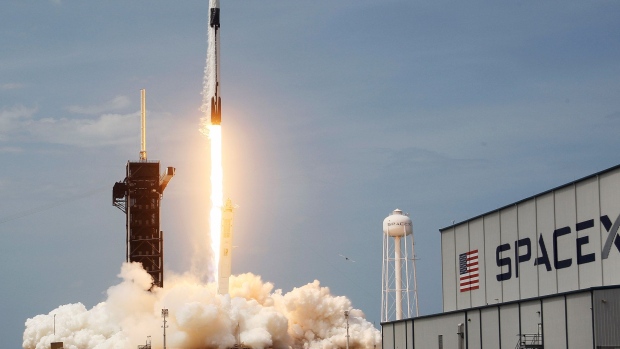 CAPE CANAVERAL, FLORIDA - MAY 30: The SpaceX Falcon 9 rocket with the manned Crew Dragon spacecraft attached takes off from launch pad 39A at the Kennedy Space Center on May 30, 2020 in Cape Canaveral, Florida. , Joe Raedle/Getty Images

A SpaceX engineer pleaded guilty to insider trading after buying information off the dark web with the goal of profiting from illegal tips about companies, U.S. prosecutors said Thursday.

From 2016 to 2017, James Roland Jones used the moniker “MillionaireMike” to illegally purchase names, dates of birth, and Social Security numbers to open a fraudulent brokerage account, according to a Justice Department statement. Through that account and others, Jones traded on tips, one of which was provided to him by an undercover FBI agent, according to the statement.

An attorney representing Jones didn’t immediately respond to a request for comment. Jones is 33 and based in Redondo Beach, California, according to the Justice Department’s statement. Spacex, whose full corporate name is Space Exploration Technologies Corp., is the aerospace manufacturer and space transportation company founded by Elon Musk.

In a parallel civil case, the U.S. Securities and Exchange Commission accused Jones of selling fake tips about companies, with the regulator saying it was its first-ever enforcement action tied to securities law violations on the dark web.

Jones got the idea to sell tips after earlier lying about having market-moving information so that he could access a purported online forum for insider trading. Several people paid Jones about US$27,000 combined in Bitcoin transactions, ultimately trading on his fake tips.

“This case shows that the SEC can and will pursue securities law violators wherever they operate, even on the dark web,” David L. Peavler, director of the SEC’s Fort Worth regional office, said in a statement.

The term “dark web” refers to a subset of the internet that is intentionally hidden, requiring specific software to access content.