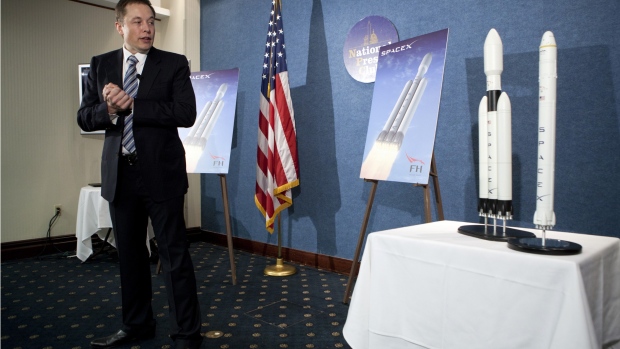 Falcon Heavy rumbled aloft at 6:35 p.m. local time from NASA’s Kennedy Space Station in Florida. SpaceX then recovered all three of the boosters back on Earth, achieving a feat it wasn’t able to pull off in the rocket’s demonstration flight last year. The two side boosters simultaneously returned to land and the center core touched down on a drone ship hundreds of nautical miles out in the Atlantic Ocean.

“The Falcons have landed,” Musk tweeted.

The Falcons have landed pic.twitter.com/BGQRNuYMVH

SpaceX’s mission was to deploy Arabsat-6A, a high-capacity telecommunications satellite that will deliver television, radio, Internet and mobile communications to customers in the Middle East, Africa and Europe, according to a press kit.

SpaceX set a company record last year with 21 launches for customers. Much of the focus this year is on the first flight with humans on board: SpaceX and Boeing Co. have contracts with NASA to ferry American astronauts to the International Space Station as part of the agency’s Commercial Crew program.

SpaceX completed its Demo-1 flight for the program in March. The next key steps are an in-flight abort test, followed by the first flight with two astronauts.