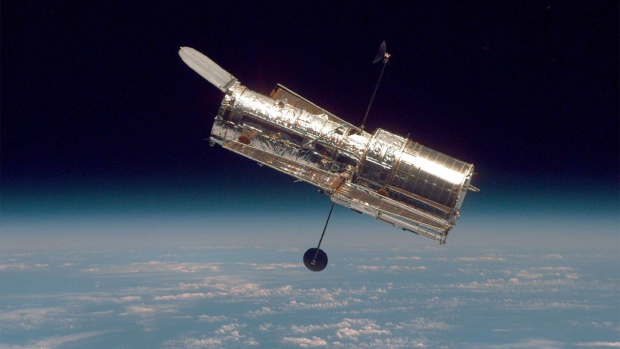 IN SPACE: (FILE PHOTO) In this handout from the National Aeronautical Space Administration (NASA), the Hubble Space Telescope drifts through space in a picture taken from the Space Shuttle Discovery during Hubble?s second servicing mission in 1997. NASA annouced October 31, 2006 that hte space agency would send a space shuttle to the Hubble Telescope for a fifth repair mission no earlier than May of 2008. (Photo by NASA via Getty Images) , Photographer: NASA/Getty Images North America

(Bloomberg) -- NASA said Thursday that it’s working with SpaceX to study using the company’s Dragon spacecraft to boost the space agency’s Hubble Space Telescope into a higher orbit. NASA and SpaceX signed a Space Act Agreement to look into such a flight.

The deal signed by NASA and Space Exploration Technologies Corp. called for collaborating on a feasibility study of such a mission, though NASA has yet to commit to such a flight. NASA said that SpaceX is funding its own participation in the study.

“We obviously have a lot of experience,” from previous SpaceX missions docking with the International Space Station,” Jessica Jensen, vice president of customer operations and integration at SpaceX, said at a NASA press conference. “We want to use that as our foundation.”

Without periodic boosts, Hubble’s orbit would eventually decay and the telescope would burn up in Earth’s atmosphere. Eventually NASA will need to come up with a plan for how to safely guide the telescope back to Earth. But pushing the telescope into a higher orbit could potentially “extend its observational lifetime,” according to Thomas Zurbuchen, NASA’s associate administrator for science.

NASA says SpaceX approached the space agency with the idea of using Dragon to boost Hubble’s orbit. SpaceX mentioned the prospect of using a crew for the flight, but said it’s possible that a crew may not be needed in the mission, depending on what the study reveals.

NASA and SpaceX hinted that billionaire Jared Isaacman could possibly be involved in the mission if it gets funded in the future. Isaacman has contracted with SpaceX to perform a series of human spaceflight missions called Polaris Dawn. The first flight of the program is slated for early next year, with one of its crew members performing a planned spacewalk using a newly designed SpaceX spacesuit.

It’s possible that a future Polaris Dawn mission could be used for the Hubble mission, though Isaacman did not commit to that.

Isaacman previously flew to space on a SpaceX Crew Dragon, as part of a flight called Inspiration4. Isaacman fully funded that mission and brought three civilians with him to orbit.

Hubble’s currently located roughly 535 kilometers (332 miles) above Earth, according to Patrick Crouse, the Hubble Space Telescope project manager at NASA. However, raising the telescope’s orbit to 600 kilometers (373 miles) could extend its lifetime by 15 to 20 years, he said.