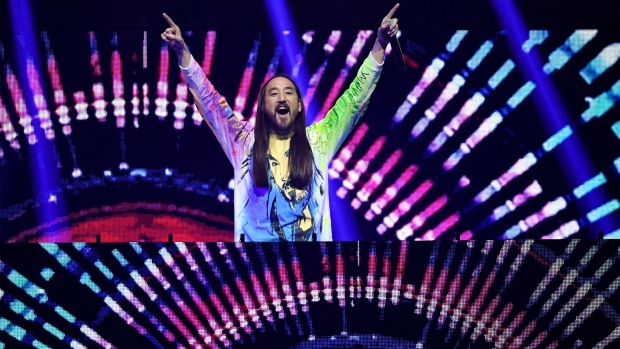 (Bloomberg) -- A group of artists, athletes and entertainers, including DJ Steve Aoki and South Korean rapper T.O.P, are slated to join Japanese billionaire Yusaku Maezawa on the first private SpaceX flight around the moon as soon as next year.

The unorthodox crew was announced in a video posted online early Friday by Maezawa, 47, who said last year that he wanted to include “people from all kinds of backgrounds.” T.O.P, also known as Choi Seung-hyun, will be joined by a group including space YouTuber Tim Dodd, actor Dev Joshi and photographer Karim Iliya. American snowboarder Kaitlyn Farrington and Japanese dancer Miyu will act as backups.

Worth an estimated $2.8 billion on the Bloomberg Billionaire Index, the founder of online fashion portal Zozo Inc. is no stranger to the limelight. Headlines on him on any given day feature him piggybacking — literally — on the shoulders of SpaceX CEO Elon Musk, holding a talent contest to find a new girlfriend to take to the moon, giving money away on Twitter or splurging on a Jean-Michel Basquiat. He’s also already been to space, flying to the International Space Station on a Russian Soyuz rocket last December.

Space travel, or a project he’s dubbed “dearMoon,” has been Maezawa’s main fixture since stepping away from Zozo. In 2018, when he put down a deposit for a flight on what would later be known as Starship, SpaceX’s most powerful next-generation launch vehicle. Last year he solicited video applications from hopefuls seeking to join him on the round-the-moon mission. He signaled that he’s still in touch with Musk, who is also the CEO of Tesla Inc. and owner of Twitter Inc., speaking to him online earlier this month.

While SpaceX said the flight could be held as early as next year, Starship remains behind schedule and has yet to launch to orbit. SpaceX, whose formal name is Space Exploration Technologies Corp., had recently targeted as early as December for the vehicle’s first test flight to orbit.

Separately, the US and Japan are working to get the first Japanese astronaut on the moon as the two countries seek to counter China’s growing strength in the area.

--With assistance from Low De Wei.