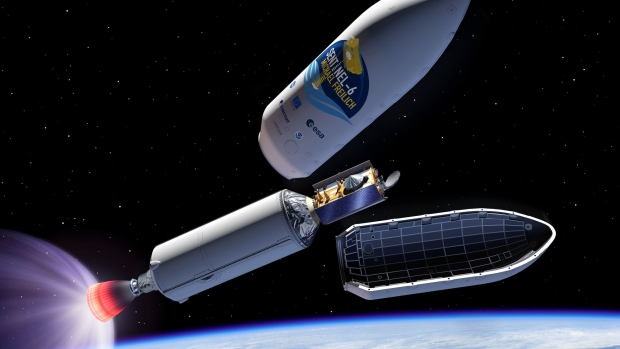 Image of New York City’s 900 kilometers of shoreline captured Aug. 26, 2019 by the Copernicus Sentinel-2 satellite. The southern tip of Manhattan flooded 10 times in the 12 months through April, according to the National Oceanic and Atmospheric Administration’s annual report. Photo: European Space Agency , Copernicus Sentinel-2/ESA

(Bloomberg) -- A new payload that Elon Musk’s SpaceX will deliver into orbit next month will play a pivotal role in measuring sea level increases, potentially helping to spare economies from billions of euros in damages by the end of this century.

The Sentinel-6 Michael Freilich satellite lifts off Nov. 10 aboard a Falcon 9 rocket that will be launched from Vandenberg Air Force Base in California. Its mission will be to track how the accelerating rise of sea levels are changing coastlines, threatening the habitat of more than a third of the world’s population. The European Space Agency will provide details about the mission on Friday at 4 p.m. in Paris.

“Measurements of global and regional sea level have become a valuable tool for decision makers to assess one of the most compelling impacts of climate change and how to prepare for flooding of coastal areas,” said Paul Counet, strategy chief at EUMETSAT. His 30-nation meteorological consortium is in charge of operating Sentinel-6 and crunching the 300 gigabytes of data that will be produced daily by the satellite.

Sentinel-6 will update maps of the oceans covering 70% of the planet every 10 days. The satellite is packed with powerful new digital altimeters — instruments that bounce electromagnetic pulses off the globe’s surface to detect millimeter-scale changes in elevation. Engineers at the European Space Agency, along with the National Aeronautics and Space Administration developed the mission. NASA contracted Musk’s Space X to launch the payload into an orbit 1,336 kilometers (830 miles) above Earth.

“Altimetry allows us to explore the current mean sea level and how this changes in space and time, something not trivial at all,” said Michalis Vousdoukas, an oceanographer  who uses the data to estimate the economic costs of climate change. “All this information is fed in our models and allows us to analysis future water levels, areas flooded, as well as the resulting economic losses and the potential adaptation measures.”

If economies don’t dramatically curtail fossil fuel consumption, Europe’s coastlines could face  as much as 239 billion euros ($280.6 billion) in damage annually from sea level rise by the end of this century, according to study published in May by Vousdoukas and his team of researchers. They estimate yearly damages could swell eight-fold to 12 billion euros — even under the best-case scenarios where temperature increases are kept well below the 2-degree Celsius (3.6 degree Fahrenheit) threshold mandated by the Paris Agreement.

Data from Sentinel-6 is expected to support policy makers worldwide as they decide where to build coastal-defense systems and whether seashore property should be developed for long-term use. The satellite will track the complex interplay of factors that lead to higher sea levels, said Carlo Buontempo, the director of Europe’s Copernicus Climate Change Service.

“It will help us to measure the thermal expansion of the oceans, the melting of glaciers and ice caps, and isostatic rebounds on the coasts,” Buontempo said in an interview. “By looking at the shape of the sea surface, you can also derive information about the ocean’s circulation.”

The National Oceanic and Atmospheric Administration, which also provided instruments to Sentinel-6, expects that sea-level rise will increasingly threaten U.S. coastlines. By 2030, the Battery, at the southern tip of Manhattan, will flood 20 to 40 times a year. By 2100, that could rise to 50 to 135 times, according to a NOAA report published in July. The current record for annual floods at the tip of Manhattan is 15, set in 2017.

“By 2050, we’ll have a different coastline than we do today,” said Josh Willis, a scientist at NASA’s Jet Propulsion Laboratory in Southern California. “Satellites are the most important tool to tell us this rate. They’re kind of a bellwether for this creeping global warming impact that’s going to inundate coastlines around the world and affect hundreds of millions of people.”