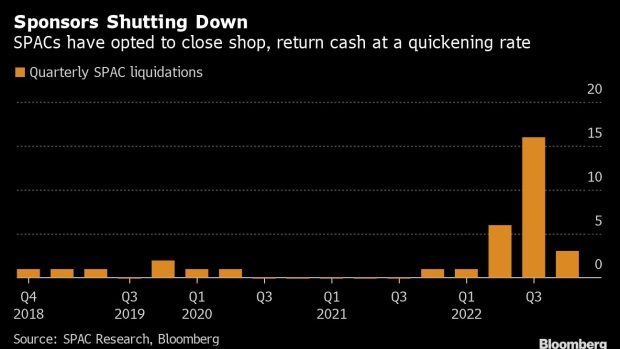 (Bloomberg) -- SPAC sponsors, already grappling with Wall Street’s lost appetite for their deals, are beginning to shut down operations early to avoid potential hits from a new US tax that targets share buybacks.

The bulk of the $165 billion held by special-purpose acquisition companies could face a 1% excise tax if they return cash to investors after the start of the new year, making them collateral damage of the new provision included in President Joe Biden’s Inflation Reduction Act. Already, two SPACs have specified that they want to return the cash they raised to investors before year-end to avoid getting dinged, and that number is likely to grow.

“This is yet another hurdle for SPAC sponsors in an environment that’s already very difficult for them to be successful,” said Julian Klymochko, who manages a SPAC-focused fund at Accelerate Financial Technologies. “I would expect to see more sponsors push to liquidate before the end of the year to avoid having to pay millions in taxes.”

Once the darling of the capital markets, SPACs are facing increasing political, regulatory and economic headwinds. Hundreds of sponsors’ pocketbooks are at risk as the tax concerns pile on to the already fizzled SPAC market. More than 450 SPACs with nearly $125 billion held in trust are in need of merger targets ahead of 2023 deadlines, data compiled from SPAC Research show. Another 65 working to get tie-ups closed might get dinged if they struggle to complete their mergers.

Overall, since the provision was enacted in August as part of Biden’s sweeping tax, climate and health-care legislation, at least five blank-check sponsors have moved to liquidate early, a shift from the status quo where backers opt to pay investors money to stick around a bit longer. More SPACs, such as Digital World Acquisition Corp., the blank-check firm taking Donald Trump’s media company public, are warning investors that the levy could apply to them.

Forest Acquisition Corp., which has yet to debut, said in an Oct. 5 filing that the tax could hit shareholders if it’s forced to liquidate. Another SPAC, Plutonian Acquisition Corp., earlier this month flagged the tax among the risks that may decrease the value of its shares.

SPACs were ensnared in the law’s effort to rein in public companies’ frenzied pace of repurchasing shares to help boost their value, rather than using extra revenue to invest in the company or pay higher dividends. Other types of shares, such as preferred stock with built-in redemption features, also appear to have been hit by the new law, which goes into effect in 2023.

The industry is asking the Treasury Department and Internal Revenue Service to offer guidance on whether the law applies to SPACs, said Keith Townsend, a partner focused on capital markets transactions at law firm King & Spalding.

The hope is that regulators might bifurcate the tax treatment of share redemptions that happen after a SPAC successfully merges with a private company to take it public from those that simply wind up and return shareholder funds, Townsend said. In the latter case, “it just flies in the face of logic that the excise tax should apply,” he said.

Not every blank check company rushing to fold is blaming the new tax. Two SPACs founded by serial deal-maker Bill Foley partly blamed the poor performances of the SPAC and traditional initial public offering markets on Oct. 3 when unveiling plans to accelerate their liquidation to return cash to investors before Dec. 31.

An upcoming rule from the Securities and Exchange Commission -- an attempt to level the playing field with traditional IPOs -- is another cloud over the industry. That threat of enhanced liability, meant to improve transparency and investor protections, has forced SPAC sponsors to operate as though the rule was already in place, Townsend said. The proposal has also driven out large banks that entered the SPAC underwriting business at the height of the mania.

With the broader bubble for SPACs and the companies they’ve taken public -- known as de-SPACs -- burst, wiping out billions along the way, Wall Street is left wondering what can be done by politicians to help the down-and-out industry.

“If the primary regulator is coming after the industry and Congress takes an action that has an indirect impact on the industry, it doesn’t seem like there are any hands to help from a DC or policy perspective,” Compass Point analyst Edwin Groshans said.