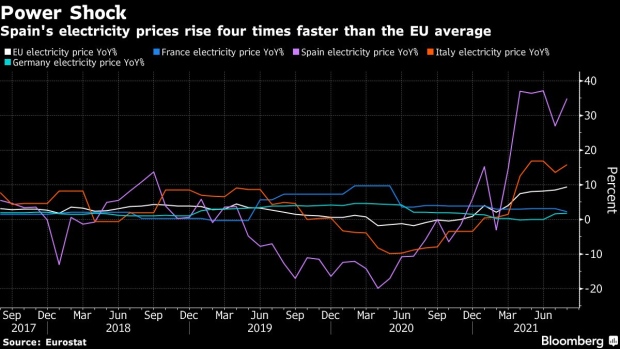 (Bloomberg) -- For European nations looking for ways to protect their citizens and businesses from skyrocketing energy prices, Spain has a dispiriting message: there’s only so much governments can do.

After months of devising policies to cap the pain of a record surge in gas and power prices amid supply shortages, Spain’s Socialist Prime Minister Pedro Sanchez on Thursday did a volte-face, effectively conceding that the measures were doing more harm than good.

Although an extreme case -- Spain relies more on imports for its energy needs than most European Union nations -- the country’s experience shows what lies in store for the region as it heads into the colder, gas-burning months of winter. While the energy crisis has forced itself on the agenda of the EU’s Oct. 21-22 summit when emergency measures to blunt its impact are set to get a nod, the case of Spain shows how sparse the toolbox is to fight the surge.

“No matter how much you remove taxes, global prices continue to rise, which makes these measures useless and you only lose revenue,” said Juan Carlos Martinez, economics professor at IE University in Madrid. “There is not much room for this or other governments to fight soaring prices. Things will get worse. Electricity will look like a joke compared to gas when we get to winter.”

Knowing how vulnerable it is, Spain began its fight to temper the impact of rallying natural gas prices and limited supplies as early as in June, putting in place temporary tax cuts to lower consumers’ gas bills. That did little to stop electricity prices from jumping a whopping 11% in August and driving Spanish inflation to its highest in 13 years.

Then, back from its summer break, the government in mid-September scrambled to put in place a patchwork of policies through an executive decree that, among other things, imposed a windfall tax on utilities. Again, the results were dismal: utilities lost billions in market value, while electricity prices continued to set daily records.

Spain’s biggest energy companies, Endesa SA, Iberdrola SA and Naturgy Energy Group SA, had argued that large parts of their power is sold through long-term contracts and should be exempt from the windfall tax. Failing that, they sent out letters to their industrial clients informing them that prices would have to be revised. One steel-maker, Sidenor Aceros Especiales SL, announced on Monday that it would stop operations, citing higher power prices.

Utilities also said that prior to the September decree, 75% of the country’s energy demand had fixed prices. They said the measures would transfer the cost of the crisis to consumers who weren’t affected before.

The implications for the broader economy forced Sanchez to reel back the measures on Thursday, saying they would need to be strongly nuanced. His Ecological Transition Minister Teresa Ribera, who oversees energy, made similar noises. Ribera and Sanchez both said utilities that offer prices to industrial users at the same levels as before the surge in gas prices wouldn’t be hit by the new levies.

More damningly, Ribera told Parliament on Thursday that the estimates made by the government in September were already outdated and needed revising, underlining the difficulties of trying to control a situation that stems from global supply and demand dynamics.

Granted, Spain is particularly vulnerable to international gas-price fluctuations. It doesn’t have significant gas pipelines connecting it to the rest of Europe, and so has to rely on imports from northern Africa and large amounts of liquefied natural gas. When LNG demand is high in other parts of the world, like Japan, it competes in tight markets.

With imports accounting for about 75% of its energy, Spain was fifth among 40 European nations tracked by Eurostat in 2019, prior to the Covid-crisis. The country ranks second in its dependency among major EU economies.

Still, every country is trying to cap end-user prices.

“While the shock has its own particularities in each country, the political challenge other European governments face is similar,” said Antonio Barroso, a managing director at Teneo. “High power prices, whether of gas or electricity, are extremely politically toxic. The incentive to adopt measures to protect consumers as much as possible is quite strong.”

Countries across Europe are trying to tackle the hike in energy prices through different ways -- from price caps for default tariffs that protect 11 million people in the U.K. and burning more oil in Sweden to plans for small nuclear reactors in France.

For its part, as Spain struggles to confront the crisis, the very pro-EU government in Madrid has found Brussels wanting. Its proposal to get the bloc to make pooled purchases of energy supplies -- not unlike the EU’s joint acquisition of Covid19 vaccines -- has gone nowhere.

The EU has effectively shown that it has a limited scope to enact a joint plan to alleviate the impact of the crisis -- a move made difficult by the varying energy sources and strategic interests of member states.

“It’s very hard to put a band aid on the power market,” said Rob Barnett, an analyst at Bloomberg Intelligence.