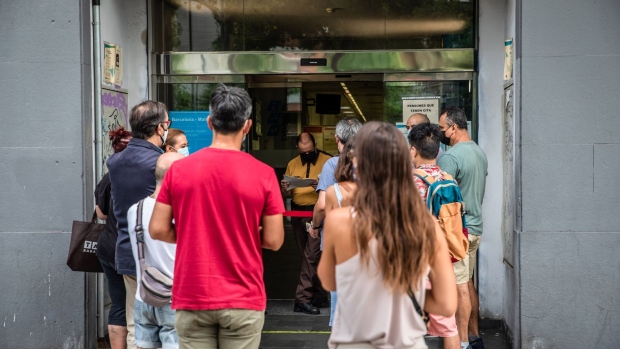 Job seekers queue for their appointments outside a regional employment office in Barcelona, Spain, on Wednesday, Aug. 12, 2020. Spain's unemployment rate rose in the second quarter, a harbinger of the bleak months ahead for one of Europe’s most troubled labor markets. Photographer: Angel Garcia/Bloomberg , Bloomberg

(Bloomberg) -- Spain could be stuck with an unemployment rate of around 20% through at least 2022 as the economy struggles to shake off lasting damage from the coronavirus pandemic, according to the country’s central bank.

The Bank of Spain’s latest forecasts come as the country deals with new outbreaks of the disease. The infections have prompted other nations to issue quarantine orders on citizens returning from Spain, undermining the revival of the vital tourism industry.

The central bank said the economy could shrink between 10.5% and 12.6% this year, depending on the severity of outbreaks and containment measures. While that’s slightly better than the 15% slump projected in its worst-case scenario in June, it would still mark one of the deepest contractions in the euro area.

The prospect that around one-fifth of Spain’s labor force could be unemployed for several years heaps pressure on Socialist Prime Minister Pedro Sanchez to extend the country’s furlough program beyond its Sept. 30 expiration date. He’ll also be pressed to come up with an effective plan to boost job creation in industries that are likely to bounce back, despite the lingering effects of the pandemic.

Spain already had one of the developed world’s highest jobless rates before the COVID-19 crisis. Hundreds of thousands of workers, particularly in the tourism sector, remain furloughed. Industry leaders are negotiating with officials on the possibility of an extension through at least the end of December.

The central bank’s economists cautioned that risks remain to the downside. They expect a rebound of between 4.1% and 7.3% in 2021, weaker than previously anticipated.

“We are facing a less favorable outlook in the second half of the year and that explains why we have revised significantly downward our forecast for the year 2021,” Bank of Spain Chief Economist Oscar Arce told journalists during a briefing on Wednesday. The central bank said in June that it expected an economic rebound of as much as 9.1% next year.

The forecasts, though, don’t include the billions of euros in grants and loans that Spain and other countries will receive from the European Union’s recovery fund, which is likely to have a positive impact on growth.

The government has already pumped in billions of euros to help companies and temporarily laid-off workers. The Bank of Spain expects that increased spending, coupled with a drop in tax revenue, means the ratio of debt to GDP will jump as high as 120% this year, and remain elevated through at least 2022.

(Updates with details in fourth through sixth paragraphs)