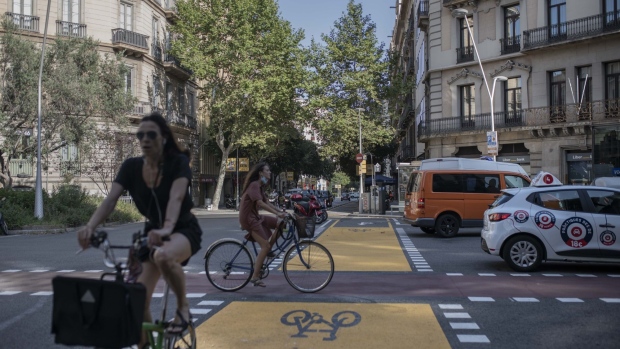 Cyclists use bike lanes that were developed during the Covid-19 state of emergency in Barcelona, Spain, on Wednesday, July 29, 2020. Barcelona, along with Lisbon and Paris, added miles of bike lanes to the streets during the coronavirus pandemic to encourage more commuters to cycle. , Bloomberg

(Bloomberg) -- Spain will sell its inaugural green bond in September, joining a flurry of other governments making debuts to fund environmental projects this year.

The Spanish Treasury’s first such bond will have a 20-year maturity, Economy Minister Nadia Calvino said on Wednesday. She didn’t specify how much it plans to raise, though the government has identified 13.6 billion euros ($16.1 billion) of projects to finance with green debt, such as sustainable transportation and waste water treatment.

In addition, Spain will invest around 20 billion euros on other environmental programs through 2023 that will be financed by the European Union’s executive arm. The bloc is also expected to make its green bond debut later this year and ultimately become the world’s biggest seller, channeling those funds to member states as part of its pandemic recovery package.

Spain will use its own green bond framework for the sale, with Vigeo Eiris -- part of Moody’s ESG Solutions Group -- giving that its highest rating, Calvino said. The EU has also laid out a voluntary green bond framework and Spain plans to align its spending with the bloc’s classification of sustainable investments, or taxonomy.

Calvino said that the first green bond is included in the country’s plan to issue 80 billion euros of net debt this year. Italy sold its inaugural green bond earlier in 2021, drawing a record orderbook, while the U.K. will sell its first in coming months.