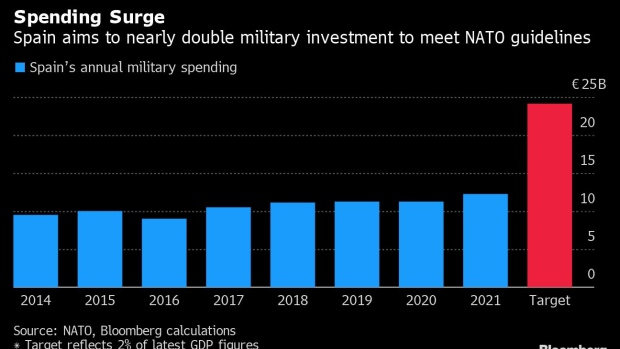 (Bloomberg) -- Spain is undertaking Europe’s most ambitious increase in military spending, and sustaining that effort hinges on transforming an undersized defense firm into a national champion.

After boardroom tensions made for a tumultuous start to the project -- which started months before Russia’s invasion of Ukraine -- the pieces are starting to fall into place. A shareholders meeting on Thursday could be the moment that the government more firmly exerts control.

The effort has taken on added urgency after Sanchez announced that Spain would abandon past policy and meet a NATO goal of spending 2% of national output on defense. The move implies military investment would need to nearly double to 24.1 billion euros ($25.3 billion) -- exceeding the percentage increase in Germany.

“Investing in defense means investing in peace, security and freedom, as well as in the creation of new jobs,” Defense Minister Margarita Robles said this month during a visit to a frigate in the southern city of Rota.

As the company’s largest shareholder, the government in Madrid is pushing for Indra to play a key role in consolidating Spain’s defense sector -- generally fragmented among small family-owned firms in the industrial north -- according to people familiar with the plans.

The goal is to have Indra, which supplies NATO forces with defense electronics such as communications and radar systems, develop the scope and scale to vie for bigger chunks of Europe-wide projects and support Spain’s efforts to increase its influence, said the people, who requested not to be identified because the discussions are private. Indra and the Spanish government declined to comment.

“It’s obvious in the way in which the Spanish government is trying to position itself that there’s an appetite in Madrid for taking on more responsibility and having a bigger voice,” said Jonathan Eyal, associate director at the Royal United Services Institute, a defense and security think tank.

Showing that a sizable share of Spain’s defense budget is supporting local jobs is important to retaining public backing for the policy shift. Scarred by decades of military dictatorship, Spanish voters have shown little interest in defense spending, but that’s now changing, according to Narciso Michavila, founder of polling firm GAD3 and a former military officer.

The champion-building got off to a rough start. Sanchez’s administration ruffled feathers at Indra last year by nominating Marc Murtra, a former government official, as chairman. The move prompted the board to strip the role of powers over day-to-day decisions and instigate a management shakeup, including appointing two co-chief executive officers.

Murtra, a private equity investor who served in a previous administration led by Sanchez’s Socialists, has the chance to cement his power at the shareholder meeting. The government is expected to secure its third board seat, while an investor linked to the government’s efforts is also planning to name a representative.

Since his nomination last May, one of the co-CEOs and the chief financial officer left Indra, and the government announced plans to increase its stake from 18% to 28% -- just shy of the level that would require a full takeover offer.

The share plan was announced two days before Russia invaded Ukraine on Feb. 24 and the holding has since climbed to 25.2%, according to data compiled by Bloomberg. The company has “special significance” for Spain and its allies, the government said in the February filing announcing its stake plans.

Much of the activity has happened behind closed doors, but Sanchez -- who visited Indra’s headquarters in October -- may soon start outlining his plans more publicly.

Next week, Madrid hosts a summit of leaders from the North Atlantic Treaty Organization, which would provide an opportunity to update allies. In early July, the Spanish leader is expected to give his state-of-the-nation speech and will likely address defense strategy.

Despite the past uproar at Indra, there are signs that momentum is building. Sapa Placencia SL, a small family-owned defense firm located in the Basque industrial cluster, will request a board seat at the shareholders meeting after buying a 5% stake in December. The company has extensive experience in the U.S. defense industry and has been supportive of Madrid’s initiatives.

After the government refused to approve the sale of Rolls-Royce Holdings Plc’s ITP Aero unit without Spanish investors, Sapa joined the Bain Capital-led consortium and the $2 billion deal got the green light. The government considers ITP as a company ripe for consolidation, the people said.

The effort gained another ally earlier this month when London-based hedge fund Amber Capital acquired a 4.2% stake in Indra. Murtra and Amber CEO Joseph Oughourlian -- already close to the government as a shareholder in the country’s largest media group -- met earlier this year.

From a business point of view, Indra has always posed a challenge because of its two-pronged strategy. While its IT unit accounts for more than two-thirds of revenue, defense churns out about two-thirds of profit.

Murtra’s focus is on expanding existing defense activities, such as radars, sensors and optical systems as well as software and technology for nuclear submarines, rather than entering new fields, a person with direct knowledge of the strategy said. The goal is to have the size and expertise to play an important role in cross-border projects, like the Future Combat Air System.

“This transformation now allows us to launch a new era based on solid foundations and should encourage us to capitalize on the new opportunities,” Murtra said after his appointment at last year’s shareholders meeting.